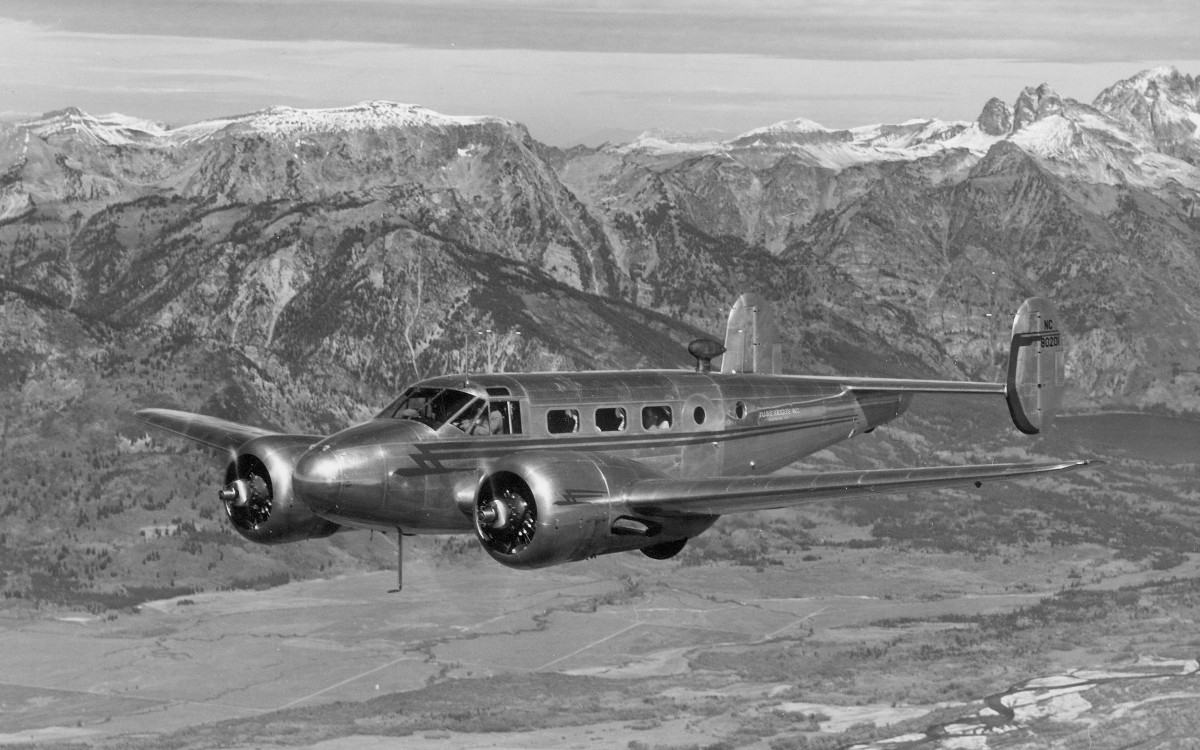 Mom went into labor with me in-flight between Denver and Cheyenne. Hear-tell, Mom hollered at my Dad, “You’d better hurry, this baby is wanting out!”

My Dad could have landed at Greeley or even returned to Denver, but what the heck, he was already heading to Cheyenne.  Landing at Cheyenne, and with no time to spare, they rushed to nearby Cheyenne Memorial Hospital.  I became a noisy first child of the Pic & Frances Walker Family less than five minutes later.  It was September 30th, 1941.

I’ve often lamented that being born in the hospital robbed me of serious bragging rights!  But, at least, I was born in Wyoming.  Have to take pride in that.  Wyoming, where men are men and… Well, being prideful is a good thing, right?

Another story herein tells how our family came to move from Wyoming to Arizona.  And it further tells about that being a good move.  Arizona is a great place, but it’ll never be Wyoming.  Wyoming will always hold that very special place in my heart.

Now that I’m playin’ the back 9 of the golf corse of life, it is fitting for my website to become part of the University of Wyoming rather than my alma-matter, Arizona State University.

The University of Wyoming is where my Dad’s history is archived.  It is where the Wyoming Aviation Hall of Fame will soon be moved to from it’s original home in Cheyenne since 1995.  My Dad and his closest friend, Ralph Johnson were the first two of four charter inductees.  I had the great honor of being the keynote speaker and was introduced by Governor Stan Hathaway.

Grand recognition of the Hall of Fame laureates is presently displayed in the old Cheyenne Airport terminal building.  Soon, it will be moved to Laramie.  Last I heard, it would be at Laramie Regional Airport (formerly Breeze field).  Nice newer facilities there.

Cheyenne sits at 6135′ above sea level, but Laramie is 1000′ higher.  Extra challenges with underpowered aircraft especially during the hotter summer season.

We lived in Cheyenne, but at just 50 miles away, commuting from Cheyenne to Laramie or Ft. Morgan was no problem.   My Dad was on the go!  He even held the assistant professor title during the time Plains was connected to the University of Wyoming,

After WWII our family moved to Saratoga.  I was in the fourth grade and beginning to appreciate the great state of Wyoming.  I became friends with Ada Bouril Jackson and we tramped around the state looking for “Daid Injuns” as Ada so colorfully referred to her amateur paleontological hobby. In her off days she’d holler, “C’mon kid, let’s go find some “Daid Injuns!”  It was always fun and interesting and it gave me a great excuse to escape the mundane jobs my Dad had me doing.  We were not 100% successful, but most times we’d come up with an arrowhead or two.  I remember one day working at the airport, I espied a perfect Sioux arrowhead.  I couldn’t wait to show it to Ada.  Later, she donated a considerable amount to the museum in Saratoga. Cheryl and I would add to it this past summer of 2022.  The museum has an area dedicated to Ada’s work.

Ada was amazing!  She graduated from college and became a collegiate PE instructor.  She specialized in Judo!  During the summer she became a waitress in the Saratoga Inn, the resort my Dad and his younger brother built.  Soon, Ada discovered being a waitress was more lucrative than teaching.  So, in the summer she worked at the Inn; in the winter she’d work for another resort, ‘Castle Hot Springs’ north of Phoenix.  She had a little house on the Inn’s grounds.  It was on the river where she could fish out her back door!  She called it her “mouse house” in honor of the many inhabitants scurrying about when she first moved in.  Soon, it became the “Mouse House” in name only.  No one messes with Ada!

Ada was unique.  Not only were her interests varied, she was involved in the community.  She would teach the use of the Atlatl, a notched stick used by indigenous people to propel a spear.  Ada was good at it.

We traveled all over Wyoming with an occasional jaunt into Utah, Montana, & Idaho.  Mostly, just day trips.  Ada had a great ability to spot obscure arrowheads, spear points, pottery shards and other items left by the indigenous people.  Some, she’d later discover, were many hundreds years old.  She spent hours cataloguing her finds.

Ada traveled with other’s as well.  For a while she was part of the “Airstream” bunch and did a lot of exploring in that venue.  Needless to say, Ada had a curiosity far greater than the average person.  Her abilities were quite varied as well…

One lovely summer day Ada stepped out on the back step-way just outside the Inn’s restaurant.  As Ada was enjoying a moment in the sunshine, my Dad came up behind her and lightly poked his two index fingers in Ada’s rib section.  And JUST LIKE THAT! My Dad was flat on his keister on the lawn next to where he’d been a second before!  The word very quickly got around and NO ONE messed with Ada!

Ada loved to travel the world and everyplace, it seemed, in the world. She would report her travels in a weekly column titled “Here and There” printed in the Saratoga Sun.

Ada was born Sept. 9, l9l6, the youngest and last surviving of the four children born to Charles Joseph and Anna Marie Oberland Bouril of Manitowoc, Wisc.; a family proud of their Bohemian Czech heritage. Jackson was a bit of a rebel against family discipline during her childhood, having fits and standoffs with her siblings and parents. She had an independent and self- sufficient personality, even then! She was the only member of her family to graduate from college, earning a teaching degree in physical education from Wisconsin State University, La Crosse in l938. She taught for several years, and when she received her first paycheck she thought, “Gee, I’m getting paid for this!” Then the Japanese bombed Pearl Harbor and America went to war. Jackson became a “Rosie the Riveter”, working in a factory in Milwaukee for Allis Chalmers. When the war was over, she decided to travel, and she wanted to give her job “to someone who needed it more than I did”. Travelling first to Florida and then to California where her sister, Louise, lived, she found that she loved the greater West and made the West her home thereafter. Her first job was on a guest ranch (owned by the sister of Randolph Hearst) where she said her “gift of gab” allowed her to become a tour guide. Then, one Memorial Day weekend, she was asked to work as a waitress. “That’s when I found out about tips,” she later said, and she liked the work. After that, Jackson waitressed in a Hungarian restaurant in Tucson. While there, she applied for and received a job with Hobergs, a resort north of San Francisco, ultimately becoming the head waitress. Hobergs later built a new resort in Borrego, Calif., where she was in charge of the dining room. With this move, her interest in archeology was whetted. During those years at Borrego, Jackson studied archeology, purchased a surplus World War II Jeep, and roamed the desert nearby, further developing that interest in archeology. She formed an annual routine of working both the winter and summer resort seasons and travelling in between. She worked the winters at a resort named Castle Hot Springs, east of Wickenburg, Ariz., and summers at the Saratoga Inn in Wyoming. During these years, this independent woman traveled throughout the United States and Canada. In 1951, Jackson made her first trip to Europe, visiting a niece in England, and then toured much of Europe alone. “That was the era of Europe on $5 a day,” she said. Later, she raised it to $10 per day. Throughout her life, she toured the world; Europe, Central America, China, Australia, South America, Japan and Taiwan. Jackson kept the Saratoga folks informed of her travels with a “Here and There” column in the Saratoga Sun. Her last major travel was to China in the 1990s. Cheryl went along as Ada’s “seeing eye companion!”  Ada had been suffering from MD “Macular Degeneration.”   Seemed like nothing could slow Ada down.  Full bore until near the very end.

When asked how she could afford these trips, she said “I economized when I could, I had my tips, and I had stock market tips”. She learned enough to invest in the stock market and was disciplined in following her investments and the advice of her contacts. Jackson moved permanently to Saratoga in 1961, living in what was affectionately known as the “Mouse House.” In 1971, Jackson married and spent a year traveling with her husband. The marriage didn’t last and they separated, though she did keep the Jackson name, liking the simplicity of not having to spell and explain the name Bouril. Ada worked at the Old Baldy Club in Saratoga as a waitress, and later as a tour guide. During these years, she became an avid “brookie” fisherman, an outdoors camper in her VW bus, and in American Indian archaeology, as she called it: being an “Injun” hunter. She became active in Wyoming archaeology, joining the Wyoming Archaeological Society and enjoying numerous discussions with professional archaeologists at the University of Wyoming. She also joined the local archaeology club and was instrumental in developing the World Atlatl Championships in Saratoga. These contests were held for a number of years, attracting people from as far away as China. These contests are still held in various locations in the U.S., though no longer in Saratoga, except in the local schools. Perhaps Jackson’s finest archaeological achievement was the permanent “Katharine Bakeless Nason” archeology exhibit in the Saratoga Museum, housing numerous archaeological artifacts donated by local residents and the University of Wyoming. Also associated with the museum is the Atlatl Press, with funds available to encourage the publishing of archaeological information germane to the museum – again thanks to Jackson. Jackson’s eyesight gradually failed from macular degeneration. However, she planned for her retirement in the Phoenix area, which she knew, and also had longtime and very close friends from the Saratoga Inn days. My mother, Frances, and Ada’s abiding friendship grew even closer with Ada’s move to Friendship Village, Tempe, AZ.  It was important for Jackson, with no children or spouse, to arrange for her own retirement care so she would not become a burden to others. 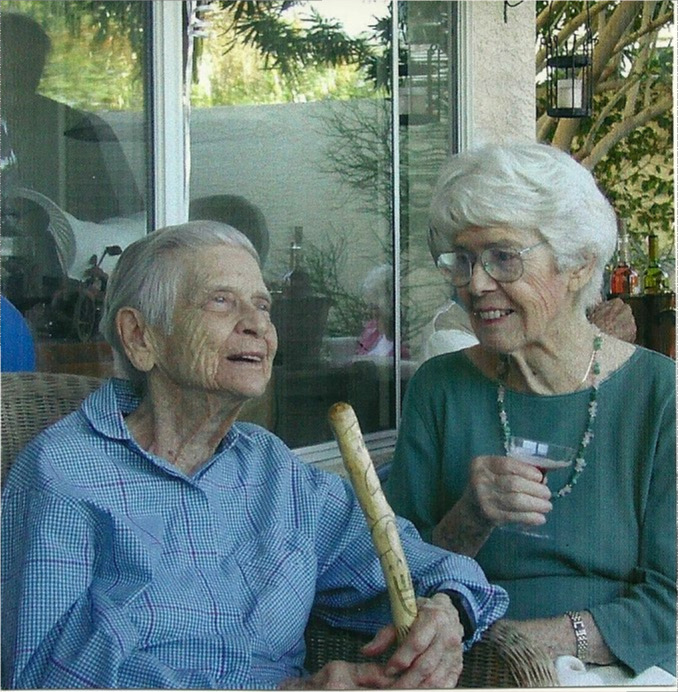 Above:  Ada with Ruth Johnson at our Ahwatukee Home not long before Ada’s  passing in 2012.

Ada was active immediately, founding the “Happy Trekkers” hiking club. She continued to hike until knee replacement surgery and age limited her stamina.  After 95 adventurous (nearly 96) years Ada is back in Manitowoc resting peaceful with her family.

Thinking of all the places I’ve been with Ada, flown over with my Dad & Jerry Donelan, later flown myself privately and as a Frontier captain.  I’ve seen much of Wyoming.  Still, there is a lot left to see.  An endless quest!

I’ve seen ’nuff to know why many refer to the state as “WONDERFUL WYOMING!”