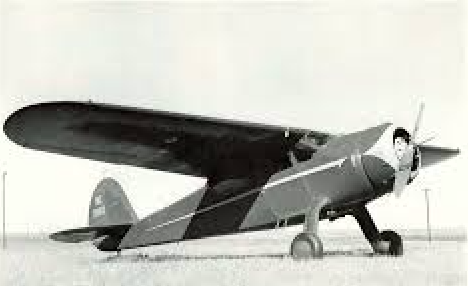 In the 1930’s, my father, and his non-flying brother, operated a fixed-base operation in Cheyenne, Wyoming. They owned a Gulf Oil bulk plant and sold fuel and oil from their FBO.

Prior to their aviation enterprises, they settled in Cheyenne selling produce from my grandfather’s farm east of Greeley, Colorado. They built an underground cellar to handle retail sales to Cheyenne residents and to the chefs at Ft. Warren Air Force Base.

My father’s interest in aviation grew from a small flying club to become ‘Plains Airways,’ the name they called their aviation company. My father became a Cessna dealer and was the first Beechcraft Dealer west of the Mississippi. I don’t remember the Cessna C-34 Airmaster he owned, but do recall the later model, C-37.

My father never talked much. He was the ‘doer’ type. A lot of what I know about my ol’ Dad I learned from others. Much from Captain Ralph S. Johnson, my Dad’s best friend. The two of them shared a basement apartment together as young bachelors. Six decades later they would be the first ones chosen for the Wyoming Aviation Hall of Fame. Along with two other stalwart aviators, they were inducted in 1995. Ralph was the only one of the four still living then. My father, ‘Gone West’ in 1993, having missed my keynote speech.

It was later in my father’s life that I learned some interesting things about the Ol’ Man. I knew he’d first learned to fly as a teenager in Greeley, Colorado in 1924. His first solo was in an OX-5 powered Alexander Eaglerock.

I was aware that he had done some barnstorming in the late 20’s and early 30’s. I also knew of his marketing ploy to drum up business for his fledgling company, Plains Airways. He put up two billboards. One on the east end of Cheyenne, the other at the west end on the highway that became I-80. He had a picture of my mother on the billboard with the words, “If she can learn to fly, so can you!” with, of course the name and phone number. The women’s rights folks would have had a heyday with that! Still, it was apparently an effective means of advertising.

My mother was the first female to learn to fly in the Great State of Wyoming. She flew until the summer of 1941 when, as I was told, it was my fault her flying career was cut short. She became too large with me to clamber aboard the small Luscombe 8A airplane she was flying. I arrived a few months later in September of 1941. WWII was little more than a month away.

During WWII Plains Airways trained more than 10,000 pilots and mechanics for the war effort. But I digress!

One beautiful spring day in the mid 30’s my mother would greet two little old ladies in the reception area of Plains Airways. They wanted to know about taking a flight. They had never flown before, but hoped to fly over the Oregon Trail where one of the ladies as a seven year old girl, had come west via wagon train. She told of seven members in her ‘company’ who were killed by Sioux and Cheyenne Indian attacks.

According to my mother, my father said, “Sure, no problem, there are plenty of those old wagon wheel ruts still visible!” Even today, in 2019, they still prominently scar the landscape along this treacherous old route. Incredible when you think of it being between one hundred and fifty and one hundred and seventy years since those ol’ Studebaker Conestogas (Prairie Schooners) traveled across our great land.

These were poor people unable to make a future in the mid-west. They, universally, were full of hope in finding their future westerly after hearing of a land-a-plenty there for the taking. Many thousands would travel the 2,172 mile trail through Illinois, Iowa, Missouri, Kansas, Nebraska, Wyoming, Idaho and Oregon.

The Oregon Trail was initially established by mountain men, such as Joseph Rutherford Walker, between 1811 and 1830. The first immigrants traveled in 1842 and the last vestiges of this type of travel ended in 1869 with the advent of the transcontinental railroad.

The lady below on Pic’s left was seven years old back in 1855. She would be one of nearly four hundred thousand immigrants to travel westward. There will never be an exact number known.

My father’s cantilever winged Cessna Airmaster was powered by a 145 horse power Warner Scarab engine with a Curtis-Reed fixed pitch propeller. The Airmaster carried the pilot plus three passengers at the then blazing speed of 150 miles per hour. It could go a maximum speed of 162 mph and climb 1000 feet per minute. The range was 462 miles and could climb as high as 18,000 feet. The landing speed was just 50 mph.

Little doubt that the ladies pondered travel in those old Prairie Schooners as they winged across the Wyoming sagebrush. Many, in those adventurous times, would head out as a single wagon and vanish never to be heard from again. Even those able to travel in a wagon-train, consisting of 30 to 200 wagons, would suffer unimaginable hardships.

There are estimates indicating that two bodies per mile are buried in unmarked graves along the trail(s). Some estimates show a loss of seven per mile! Indians were not their only threat. Smallpox, cholera, tuberculosis, diphtheria, typhoid, “mountain fever,” and a host of other sicknesses frequently struck down many.

On the old Frank Schilt ranch north of Saratoga, Wyoming where the Overland Trail passed there is a grave of a young girl. I remember thinking, when I first saw the small picket fence around her resting spot, “how terribly lonely.” I wondered what had happened to her. …I still do!

Our high school football was played on the very abrasive native hay stubble in the pasture surrounding her forlorn grave. This was my freshman year, the first year Saratoga had a football team since before WWII. We had a perfect record, we lost every game!

Thinking again of the girl’s lonesome resting spot, I remembered the words of one of the many immigrant travelers,

“…a man must be able to endure heat like a Salamander, mud and water like a muskrat, dust like a toad, and labor like a jackass. He must learn to eat with his unwashed fingers, drink out of the same vessel as his mules, sleep on the ground when it rains, and share his blanket with vermin, and have patience with musketoes … he must cease to think, except of where he may find grass and water and a good camping place. It is hardship without mercy!”

It becomes easy to understand the desire these two little ladies make such an adventurous flight. Neither had ever been close to an airplane. Before this day would end they would be brought to the forefront of the technical marvel of aviation of the 1930s.

No doubt my father heard sounds of joy, of marvel, as the Airmaster gently lifted off the runway heading westbound. In minutes they would travel distances what the immigrants, eighty years before, spent weeks of hard toil achieving the same distance.

They would see those old wagon wheel ruts and, no doubt, remember.