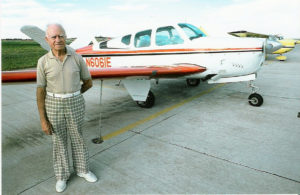 My flight with Ralph, by Kent Westedt

One day Kent Westedt had an unbelievable flight with Ralph. They were solid IFR and lost all electrical and all instruments! All they had was a magnetic compass to fly with! Ralph adroitly mentally converted the magnetic compass into a primary flight display for pitch, bank, direction and even speed. How many experienced aviators could do that before spinning in?

They were enroute from Douglas, Arizona to Cheyenne, Wyoming and just passed Denver. Ralph was able to use his new “instrument” to letdown and see traffic lights and then the beacon at Greeley where he landed with weather obscured at 50 feet – visibility 1⁄4 mile…

According to Westedt, Ralph never broke a sweat. Kent held a flashlight on the mag compass, so he gets a lot of credit for their surviving such a malfunction. Here’s the story in Kent’s own words:

“As we grow older in life, we reflect on things in the past that have truly molded us and have given us inspiration to do a lot of things and tackle the seemingly endless jobs that nobody else wants to do. One such mentor to me was a quiet, calm, self-assured person who had dedicated the majority of his life to the field of aviation design, test, operation, and innovation, Ralph S. Johnson. As I was maturing thru my teen years, I spent summers and countless hours around this man and his dedicated crew in the midst of modifying, rebuilding, renovating, redesigning, and test flying various WWII vintage aircraft and subsystems. As a result of this exposure, I became a Pilot and secured a degree in Aeronautical Engineering and most of my career was spent designing and building spacecraft, manned and unmanned.

But I digress, one of the most profound lessons in survival and keeping your wits about you occurred during a relatively routine flight starting around 10:00 o’clock in the morning on a clear day in Douglas, Arizona.

Ralph had been involved in purchasing and activating (taking out of mothballs) WWII PV-2s from Litchfield Park, Arizona and flying them down to our hanger and workshop facilities at Douglas. I had taken the semester off from college to gain some hands- on experience while taking what courses I could by correspondence. We were going to fly back to Cheyenne, Wyoming, for a much-needed R & R. We took off and flew to Silver City, New Mexico, landed, fueled, ate lunch and attended to some business, and left late in the afternoon.

As we were flying from Silver City to Cheyenne, we were using Visual Flight Rules and flying at an altitude around 8-9,000 feet, depending upon turbulence. We had some high, scattered clouds and knew of a front advancing from the west-northwest late in the evening; however it came in quicker than anticipated.

We ran into a snowstorm north of Denver at about 8 p.m. that was a complete whiteout, causing us to convert to Instrument Flight Rules. Ralph called the Cheyenne tower and they notified him that the weather at Cheyenne was clear.  He had just started the descent into Cheyenne when the aircraft electrical supply system went out, rendering all electrical instruments useless, with no lights in cockpit or instrument panel. The engine was running fine with no loss of power.

Within 30 seconds of that event, the aircraft vacuum system failed, rendering all vacuum-related instruments useless as well as the electrical system.

Ralph knew that the only instrument left that wasn’t supplied by either system was the wet compass, however, it was in complete darkness.Ralph, realizing the gravity of the situation, immediately took his feet off the pedals to eliminate the yaw response and use only the ailerons and elevator control to try to stabilize a horizon.

As the eyes became accustomed to the eerie glow around the airplane, we could see what seemed to be a faint ribbon of light stretching out in front of us. Ralph gently descended to try to get better orientation and as the string of lights became more lucid, Ralph realized from his knowledge of when the snowstorm was first encountered, the airspeed, and the harried timeline in which things had happened, that the lights were from traffic on U.S. Highway 85 from Cheyenne to Denver and we were somewhere south of Greeley, Colorado.

As he descended further, he was able to stabilize the aircraft with ground and yard lights giving us an actual horizon and we started looking for anything that might give us a better orientation of an exact location. Off to the left, at about one o’clock, the rotating green beacon of the Greeley airport came into view, then the glow of the runway lights. The lights of the town and surrounding countryside seemed to make the sky come alive and he made two right turns, a final approach, and was able to land safely.

By now, the storm had intensified, so we secured the Bonanza on the tarmac, found a pay phone, called for a taxi, which took us to the train station, and rode quietly home reflecting on the sequence of events which put us in such jeopardy. Needless to say, the reality of what had happened finally sunk in and the realization of what Ralph had accomplished kept me alone in my thoughts for the entire trip home.

As a result of this experience, Ralph analyzed the entire episode and was instrumental in requiring new FAA regulations for dual backups of both electrical and vacuum systems in aircraft.

As for me, I have often reflected on the cool, calm demeanor of Ralph, the sensitive handling and logical approach to the problem at hand, and the ability to understand the fundamentals and design of aircraft, instrumentation, and flying and have come to realize that he was an extremely fine mentor of skills, not only in aviation, but in learning, use of that knowledge, and sharing and teaching of values that I now put to use in my daily life….”