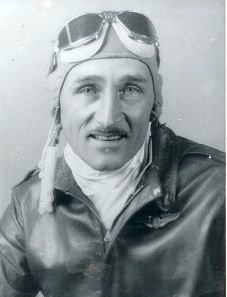 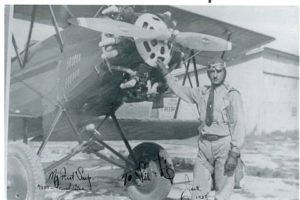 Uncle Jack, John Henry Walker (1905-1984), was my Dad’s oldest brother.  Look at the ‘featured image.’ To me “Uncle Barnsmell” looked just like Smilin’ Jack, star character of the comics created by Zack Mosly.  Uncle Jack was a true renaissance man having been born on the side of a Colorado mountain near the gold diggings of Cripple Creek where my grandfather was a “High Grader” at the turn of the 19th century.

I first thought the term “High Grader” to be complimentary to granddad.  Oooops!  In mining, high grading refers to mining out the portions of the orebody that has the highest grade of material to be mined, however it may also refer to the concealment and theft of valuable gold or silver ore by miners for personal profit. Common in the United States in the late 19th century and early 20th century, high graders would usually conceal the highest grades of ore they encountered during their work day in a pocket or lunch pail, or within the body, and later attempt to fence it on the black market.

Grandad had an accomplice.  Grandad would pile high grade ore within reach.  As he drove his team pulling the ore wagon to the stamp mill his accomplice would throw rocks at him.  Granddad, of course, threw back the high grade ore chunks.  It was enough to buy a nice farm near Kersey, Colorado.

This nefarious gene pool I’ve emanated from caused Uncle Jack to be a tad on the ornery side.  …just like my grandad!  Sadly, I would follow these great examples set by Granddad and Unc.

More than once Granny would go to the near by saloon, where Grandad rode his horse.  Somehow, she would grab his ear and give it a twist while admonishing her errant husband of his wicked ways.  She would lead Granddad and Granddad would lead his horse out of the saloon back to the farm.  Yup!  Granddad rode INTO the saloon and on more than one occasion before Granny finally had him house trained.  I’ve never been able to fathom how my diminutive grandmother could grab my giant of a grandfather’s ear…

Sound far fetched?  All true and verified by Granny who was raised by her Christian Science preacher father and devoutly religious mother.  I’m searching for some recall as to how she met my grandfather.   They were a very unlikely pair who shared a beautiful life together.  Eight children of which six reached old age.  A little girl died of diphtheria and a baby boy of, perhaps, measles.

My grandmother must have been extraordinary as a petite five foot beauty, she changed grandad Walker, a strapping six foot three inch three hundred pound mountain tough into a man of great character and values. 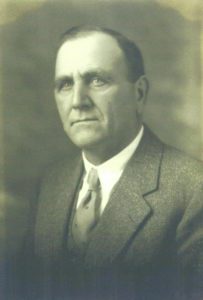 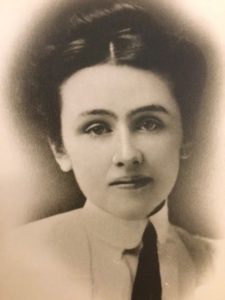 Before Jack learned to fly in the late 20’s he left the farm to become a cowboy at the mega-huge King Ranch in Texas. From being a Texas cowboy he followed his father’s footsteps and became a gold miner in Central City, Colorado.  Jack ran a steam drill down in those eerie mine shafts.

Apparently, thinking the sky above much better than the mines below, Jack took to flying.  His first airplane was a Wright J-6 powered Travel Air 4000.  My dad called it a “Cornshucker” for the many times he had to land in some farmer’s corn field following engine failure.

Jack was older but I think he learned to fly after my father who first committed aviation in 1924.  My Dad first flew in a long-winged Alexander Eaglerock powered by an Hispano Suiza (a modern replacement for the WWI Curtis OX-5 engine).  He flew both and, later, was one of the first members of the OX-5 Aviation Pioneers.

Jack bought the Travel Air with the money he made working in the gold mines west of Denver in Central City and Black Hawk.   I imagine my Granddad Walker, loaned him a few shekels as well.  Jack bought an automobile service station that was on the corner where my father and his younger brother had a dug-out cellar where they sold vegetables.  Granddad likely helped finance the gas station as well.

Later, Jack went to work for the Union Pacific Railroad in Cheyenne.   When WWII began for the US, he went on a leave-of-absence signing up becoming a flying sergeant.   He was a character whose mischievous ways knew no boundaries.

I believe I mentioned that, while I loved the tales from his wilder days, I doubted that there was even a tiny element of truth.  Turns out they were all true!

Uncle Jack had told me a story of when he was in China-Burma-India during WWII.   He had a close buddy, Teddy ?, and they would cook up some devilishness. 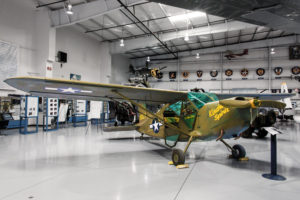 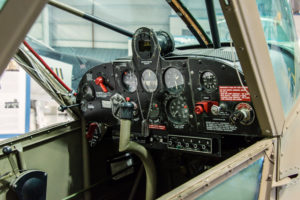 He told of “stealing” a Stinson L-5 from another squadron and flying it to Kunming, a huge B-29 base.   Inbound, hopeful of disguising his voice, he stuffed his mouth with some saltine crackers and announced that “he was coming in on one engine!”

This caused an immediate alert as a B-29 could not fly on one engine.   Even the base commander was out on the ramp searching the skies for this B-29 inbound down to one engine.   Soon, the L-5 came put-puttin’ in and landed – then taxied to a distant revetment.   The pilot, Uncle Barnsmell, hopped out, climbed over the revetment into the clutter of foliage to the “stolen” jeep Teddy had waiting.   Off they went with all the base MP’s in pursuit.   They escaped! 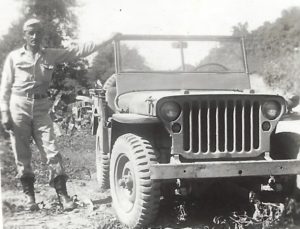 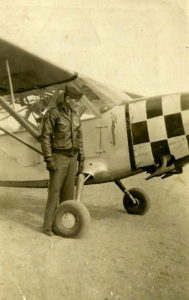 Actually, it was Uncle Jack who named himself “Barnsmell” and it sorta took with many of his nieces and nephews.   He was something of a cartoonist and often signed his cartoons “Barnsmell.”

When he lived in Cheyenne, he would often head to the Frontier Days fairgrounds and pick up dried horse turds (Road Apples).  He would shape them into figurines, shellack ’em and put a catchy name on the finished wooden base.  He would sell them to curio shops and tourists would snap them up!  Soon, he had a little cottage industry going.  He didn’t make much doing that, but it helped him buy fishin’ gear.

Years later, I regularly e-mailed with a long-time Frontier friend, Captain E.P. Lietz.   He  told me some great stories when he was with the Air Commando’s flying the ubiquitous Curtis C-46, a large transport powered by 2000 horse power Pratt & Whitney R-2800-51 engines.   The C-46 looked like an inflated DC-3.   It’s gross weight was nearly double the DC-3 at 48,000 pounds.   The super-charged 2800’s would get the C-46 over the Himalayas much better than most transports albeit many were lost under some of the toughest flying conditions anywhere.

E.P. would transport war material such as 55 gallon fuel drums into combat bases throughout the Pacific theater.   Many of his flights were into China with Kunming one of his destinations. 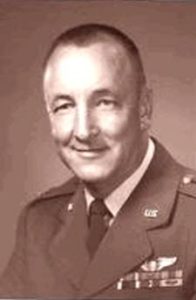 We were together, visiting in person, one day when he told this amazing story about an Army liaison airplane landing at Kunming when he was there delivering fuel for the B-29’s.  He told the story nearly identically as Uncle Jack had!   I must have had a look of incredulity because EP asked “why the look?”   …I told him how I had heard this story before and had thought it to be a made-up story by my colorful uncle.  I never disbelieved Uncle Jack again.

Jack lived with us on our little trout ranch SW of Denver the last few years of his life.   It was a memorable time for our family and his stories were seemingly endless!  He had a goodly number of stories from his China-Burma-India WWII flying days.  One, he talked about the Chinese Coolies running across the runway in front of a departing airplane. They had a superstition that the closer they could come the more bad spirits would be knocked from their back.  What a set-up for ol’ Barnsmell!  He talked about how he and other pilots would see how close they could come with the goal of removing the Chinese dǒulìs (what they called the conical hat common to the coolies.  Ol’ Unc never owned up to actually hitting the human but claimed he was an “Ace” if dǒulìs counted!  Unc flew a number of different aircraft types but the L-5 “Sentinel” is the one most listed in his log books and Form Five. 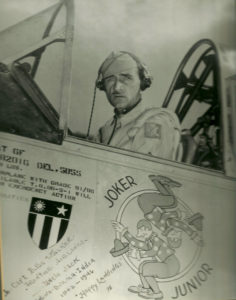 Uncle Jack with an Army “Texan”

He did the artwork and it fit him perfectly.  He was a jokester! 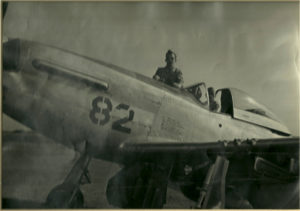 Another great story was towards the end of his life.   I had returned home from a four-day trip with Frontier.   Cheryl said “you’d better check with your Uncle Jack, he seems to be having trouble controlling his bladder and is too embarrassed to tell me about it.”

So, I went next door to the guest house where he lived.  “Uncle Jack, Cheryl tells me you’re having some plumbing problems.”  He replied, “Nope, no trouble at all.”   I said, “We need to get you down to see the doctor.”

Me:  “Yes you are, even if I have to hog-tie you and toss you in the car.”  With the futility of his objections apparent, my ol’ uncle begrudgingly climbed aboard the car.

Cheryl had made an appointment with the UP Railroad Dr.   He was my age, around 45 at the time.  He had seen Uncle Jack before an knew he had hearing loss.   So, in a loud voice he said: “Mr. Walker, do you see that shelf with the jars on it?”

Cheryl said it was the Uncle Jack and Billy show until he died a couple of years later from cancer.

I miss him.   But, his stories live on…  Below is a photo of SSGT J.H. Walker over the jungles of Burma.  The photo was taken by none other than “Gen. Jumpin Joe” Stilwell.   Uncle Jack flew the commanding general on several occasions to see first hand what the battle lines looked like. 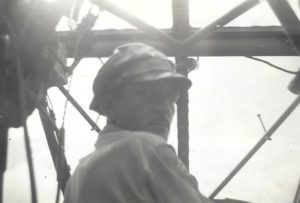 Note:  The photos of the L-5 “Sentinel” at Airbase Arizona has Uncle Jack’s name on the side along with his story for the museum visitors.   The dog tags hanging from the magnetic compass were Uncle Jack’s from WWII when he was deployed to China-Burma-India.

Here’s an old photo of Uncle Barnsmell on the Beach.  That’s me playing in the background.  I have some very enjoyable memories of my ol’ unc… 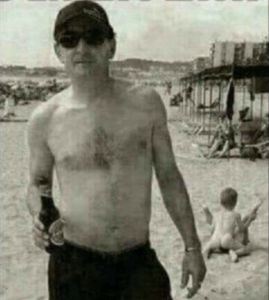