Naming this piece “Roger n’ Me” fits albeit is a bit troublesome.  Troublesome as it shares the title to a 1989 Michael Moore movie a movie of much disdain by we conservative folks.

This past January 12th, 2019 Colonel Roger K. Parrish joined the “Gone West” scroll.  Knowing I’ve been tasked with giving Roger’s eulogy the 22nd of March, just days away, I am finding memories, of literally hundreds of flights with Roger, floating thru my mind.

Roger and I spent a lot of time together beginning in 1991 when he was a co-pilot on the newly acquired America West Airlines Airbus A-320.  I had just checked out on the ‘Bus’ as an instructor.  Part of the check-out required 25 hours of riding the “jump-seat” on AWA line trips.

I showed up for my first assigned line trip and discovered my friend, Captain Marshall Jones, in command.  He introduced me to his obviously older first officer, Roger Parrish. We became fast friends.

It would not be far into the future when Roger retired from line flying due to the onerous FAA “Age 60 Rule.” Now it is the onerous “Age 65 Rule” where there should be NO Age Rule!

Jim Tucker was the best boss I ever had.  Jim had been an Air Force fighter pilot stationed at Luke AFB when he retired as an O-5 (Lt. Col.) he joined the America West Training Department.  Jim and Roger worked very well together.

Our professional relationship notwithstanding, Roger and I became flying buddies.  He bought Nieuport 3 and rebuilt it.  All of the Nieuport pilots were called “captains.”  Not Roger, his name under the cockpit gunnels of Nieuport 3 was “Lt. R.Parrish.”

That caused some obvious questioning.  Roger said, “The most fun I had in the Air Force was when I was a lieutenant.”  No way was Roger going to be called a captain.  It was lieutenant or nothing!  In reality he was a highly decorated retired USAF “Bird Colonel” and former Commander/Leader of the USAF Thunderbirds. 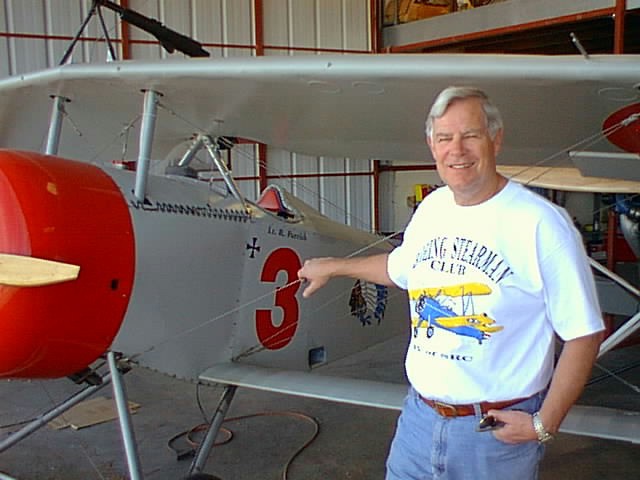 Roger and the rest of the Lafayette Escadrille d’Arizona were having a lot of fun flying the little WWI Nieuport 17, plans built, replica aircraft.  The squadron was on constant demand to fly in airshows around the valley, with some formation flights as far as Dallas, Texas!  Ft. Huachuca, Arizona was where we discovered the absence of adequate performance with a pattern altitude of fifty seven hundred and nineteen feet above sea level!

A cargo plane carried the Nieuports to Dallas. We even had plans to take them to France to honor the original Lafayette Escadrille 124 squadron from WWI, a squadron still in operation flying Typhoon fighters.

It didn’t take Roger long to convince me that my life would not be complete until I built one and joined the squadron.   An unfinished Nieuport was available.  Squadron founder/leader, Mike Wray, said, “We will help you build the airplane and have you flying in a couple of weeks!”

This sounded good.  I traded my Dodge Dakota pick up for the Nieuport and tackled the project.  However, those two weeks became fifty seven weeks before Nieuport 2 was ready for its first flight. A flight that would be one of the most memorable in my still on-going career.

Several of my flying buddies must have had a premonition.   On the cold Christmas Eve morning those cold-hearted bastards showed up with long-handled marshmallow sticks!

I had performed several high-speed taxi checks the previous day.  “High speed,” is a bit of a misnomer given the airplane lands at 28 mph.   Bright and early December 24th, the Chandler Airport tower gave me clearance for takeoff.   Down the runway I went to a smooth lift-off and climbed to the downwind leg planning a low approach followed by several circuits over the airport.

On downwind, with Mike Braegger in Nieuport 4 having joined up, the engine quit.  No warning, it simply quit!  Happily, I was able to get it started again.

Forewarned, I decided to land and forego the low approach and extra circuits.  I kept the airplane high and fast.  Good thing!  At three hundred feet above the ground the engine quit again. It simply just stopped. I recall the dismay seeing my now stationary propeller.  And noticing how very quiet it suddenly became! 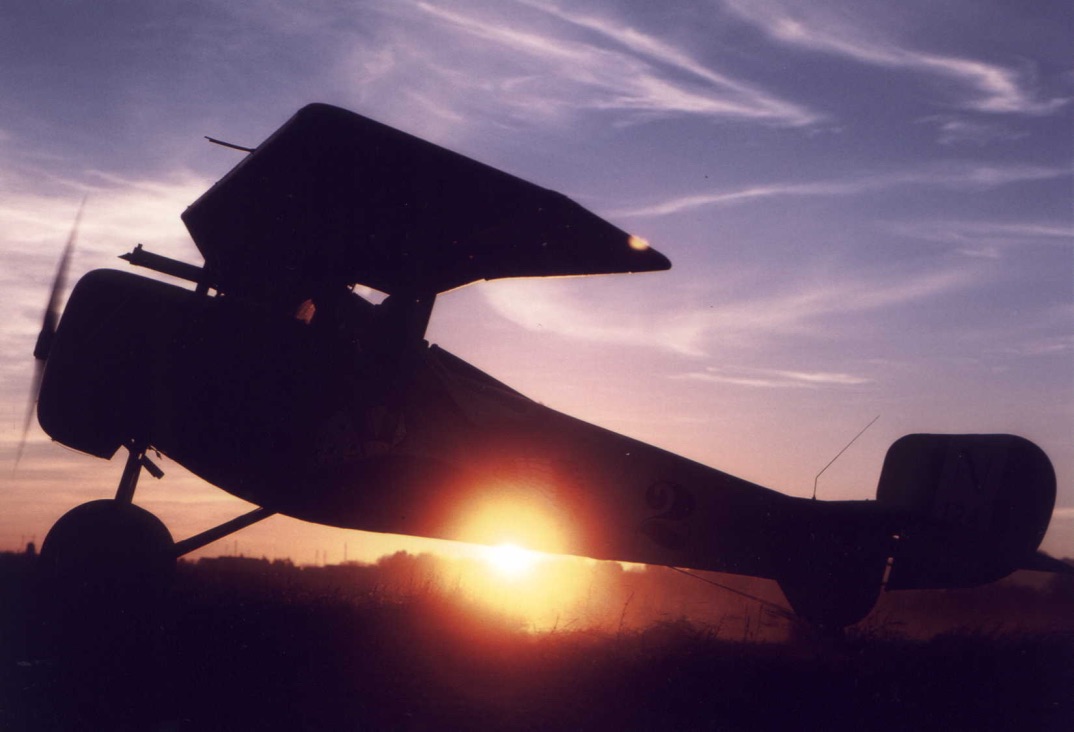 One of the mysteries of life then occurred.  The airplane literally slicked itself on the runway in what is very likely the best landing in the ten years of subsequent flights “El Duce” and I shared.

Rolling out on Runway 22 I saw an opportunity!  I exited the runway onto the taxi-way towards “my buddies” who were still holding their long marshmallow sticks.  I unhooked my seat belt and shoulder harness and, as “El Duce” came to a stop, I stood up and exclaimed, “Any questions!” …as though I had fully intended the flight to go that way.  Plenty of witness’ to corroborate my recollection now more than two decades old. 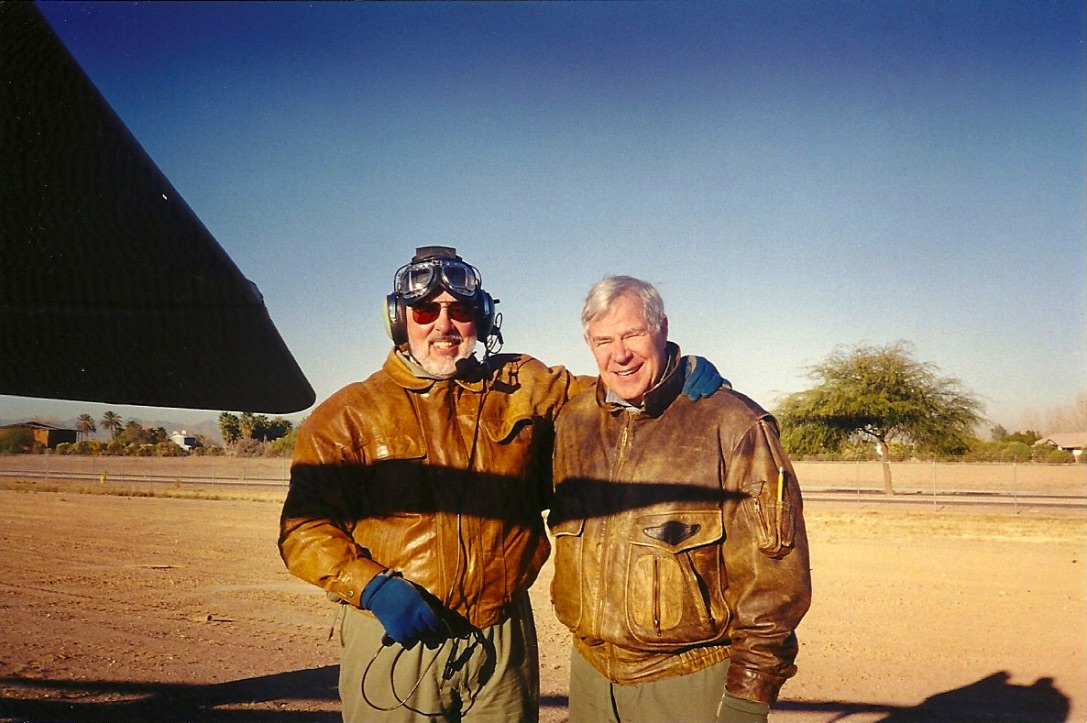 The carburetor was soon replaced and I never again suffered engine problems with N-124PW.  Later, Mike Wray talked me into installing a Great Plains kevlar-belt drive. Mike Braegger is an extremely talented wood-smith.  Mike produced a seventy-eight inch in diameter beautifully laminated wood propeller.  This gave “El Duce” more than five hundred pounds of thrust.  That was nearly double that of the rest of the squadron with their puny sixty inch propellers.

“El Duce” would then be off the runway in one hundred feet and at pattern altitude by runways end.  As the rest of the squadron flew along, I would literally circle them.  An amazing performance increase.  Soon this would be of great chagrin to my buddy Roger.

We were often invited to fly at “Luke Days” air show as the guests of Luke AFB.  On one occasion we landed in the afternoon prior to the next days show.  We secured our Nieuports in the hanger provided before proceeding to the 306th Fighter Squadron Officer’s Club for a little libation. 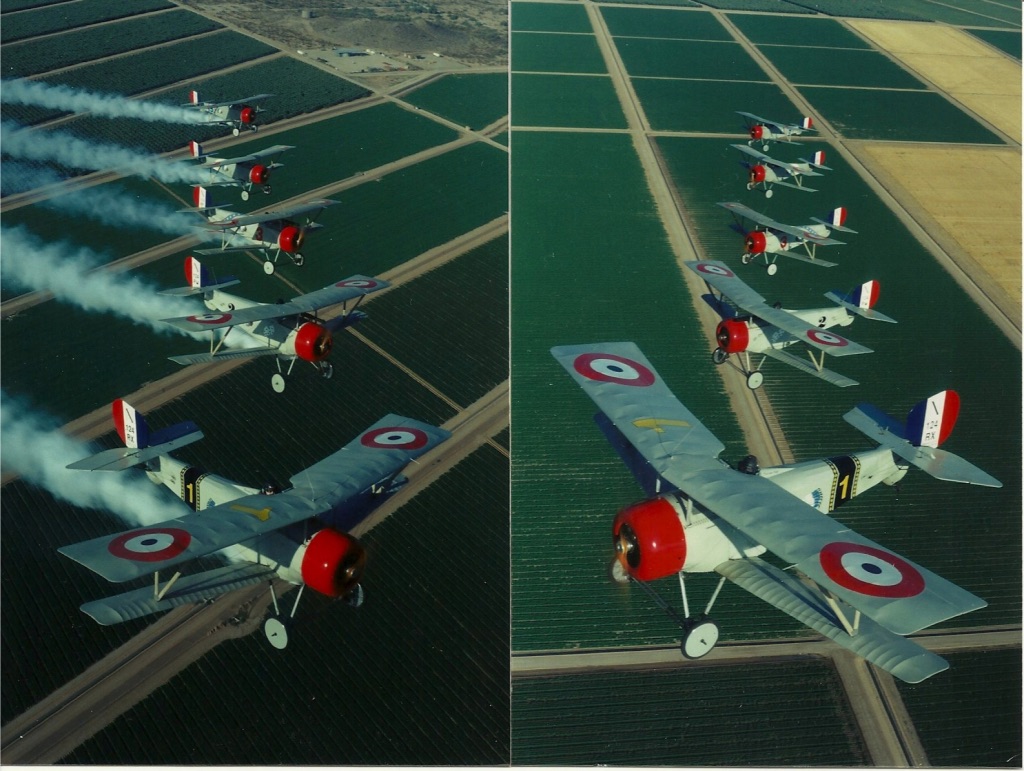 Everyone was in their flight suits looking very much alike except for those of us with grey hair or, in my case, no hair.  Roger, who never drank alcohol, was sipping a soft drink.  I was sipping a beer.  I espied one fellow with his back to us with a ‘F’ Jane Fonda’ shoulder patch on his flight suit.

I nudged Roger, “Lets find out where he got that patch.  We need that for our flight suits!”  Walking over, I’m about to tap this fellow on his shoulder when I recognize his voice.  Moving around towards his front I see it is Mark Berent!  I stuck my hand out and said, “we haven’t shaken hands since Cambodia in 1972!  He just looked at me and said, “Who the heck are you?”

Mark looked almost the same as he did during the war.  Only an occasional grey hair was showing and his weight stayed within ounces of what I recalled.  As for me, I was bald after having a full head of dark curly hair and weighing forty fewer pounds back then.   And, I had a full beard coverin’ my ugly kisser!  Mark was at Luke AFB with his T-6 “Rolling Thunder” named for one of the five books he’d written about the S E Asia War Games.

As soon as I said a few words Mark recognized me and we re-kindled our old friendship that remains active today.  Mark ran the air war when I was flying out of Pochentong Air Base, Cambodia in 1971-72 and saved my life twice.  Mark Berent looms large in my book of those I really appreciate.  That’s another story for another time. 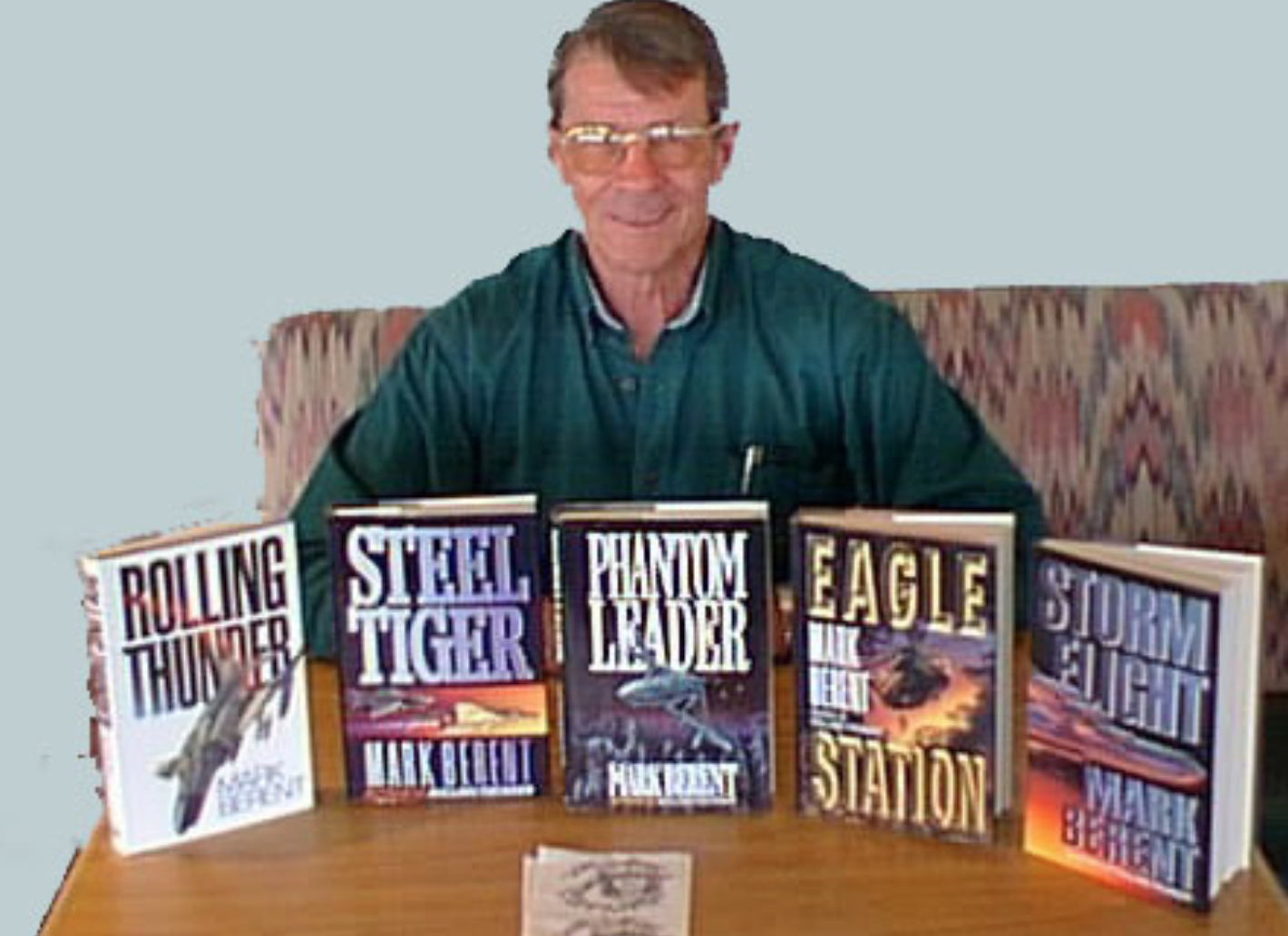 One clear – calm day, Pete Geiser in Nieuport 5 and me in “El Duce.” We were a two-ship formation proceeding to the Transportation Days event in Ahwatukee.  Out the corner of my eye I caught Roger aiming to “jump us,” a common thing in the fighter pilot world.   Roger was flying his Stearman.  He had me in his sights.  An easy kill.

This occurred very soon after the belt-drive system had been installed in “El Duce.”  I immediately left Pete and began a climb knowing a height advantage often saves the day in aerial dog-fighting.  Roger had to have been totally surprised to see the little Nieuport out turn and out climb his more powerful Stearman.

One fateful day, Roger and I took off in formation.  Roger in Stearman 832, and me in “El Duce.”  Our tails were up, we were ready to fly when a very loud “BANG,” a sound similar to a 30-06 rifle shot, and I was a nano-second later going the opposite direction!

One of the cross-wires on the landing gear had failed in a spectacular way.  As luck would again play a part, I had installed motorcycle wheels and toe brakes.  Only because of this was I able to stay on the runway.  Little damage occurred with a slightly scuffed wingtip and, of course, a fresh cable was needed to put “El Duce” back in business.  However, thinking other cables could fail, I never flew “El Duce” again.  I donated the airplane to Planes of Fame Museum where it is on display at their Valley, Arizona museum.  And I would soon own a third of a Stearman. 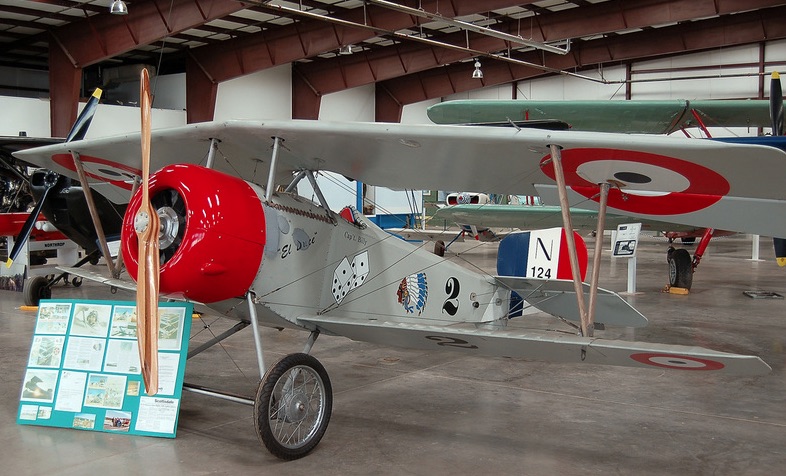 The Nieuport will remain the most challenging airplane I have ever flown.  Challenging because the takeoffs are equally daunting as the landings.  The airplane had a pronounced tendency for the tail to try to beat the nose of the airplane down the runway.  In the air it was delightful.  Boy Howdy, what a nasty little ankle biter on the ground.

Nieuport 1 and Nieuport 2 were the only two in our nefarious squadron to never depart the runway.  All the others had the experience of departing the runway and two ended upside down twice!  No injuries.  One pilot in our squadron had more experiences as such than the rest.  The name on the side of his Nieuport was “Weeds!”  I have to say that while Nieuport 3 was off the runway once Roger was not the pilot flying.  I was!

On takeoff at Casa Grande in formation Nieuport 3’s right landing gear spindle broke.  I was not only heading off the runway, I was heading directly towards air show spectators!  I had enough speed to use the rudder to steer back towards the runway and continued the takeoff rather than risk aborting into a crowd.

As luck would again play its important role, that’s how it turned out.  I touched down and immediately the airplane started to swerve to the right.   I quickly turned all the switches off and pulled hard on the brake cable bringing the airplane to a stop clear of the runway and on the runway exit pavement.

Soon, the right gear was placed on a dolly and we rolled Nieuport 3 to its hangar.  An easy fix with the airplane back flying soon after.

Not long after, I was sharing ownership of Stearman 386 and a new era of formation flying began.  Stay tuned. 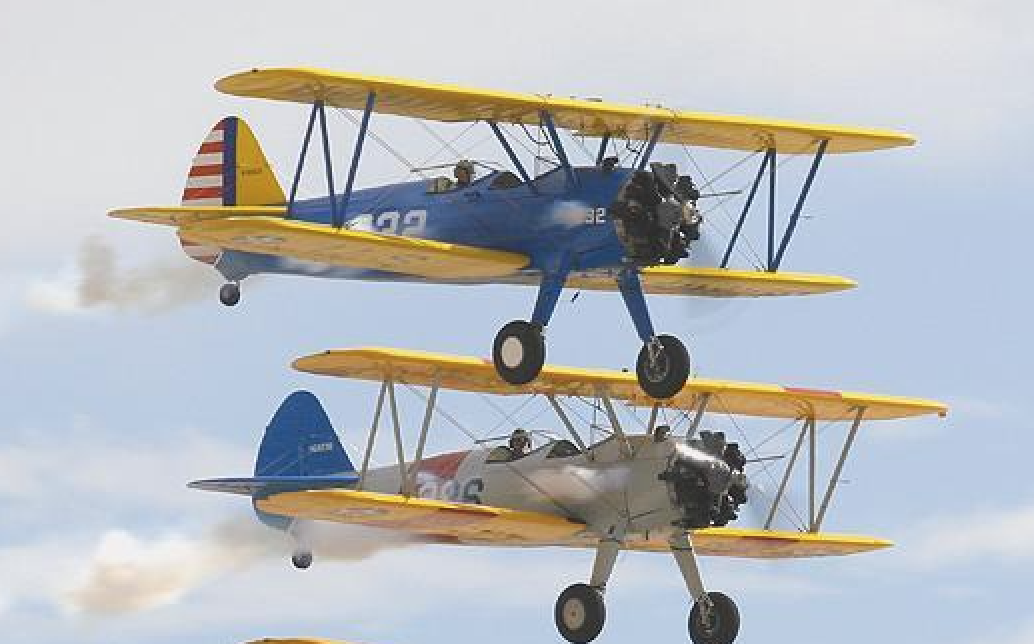 Photo of Roger in 832 and me in 386 at Nellis AFB to commemorate the 60th Anniversary of the USAF.  We were part of a five-ship with Roger leading.  Of course! 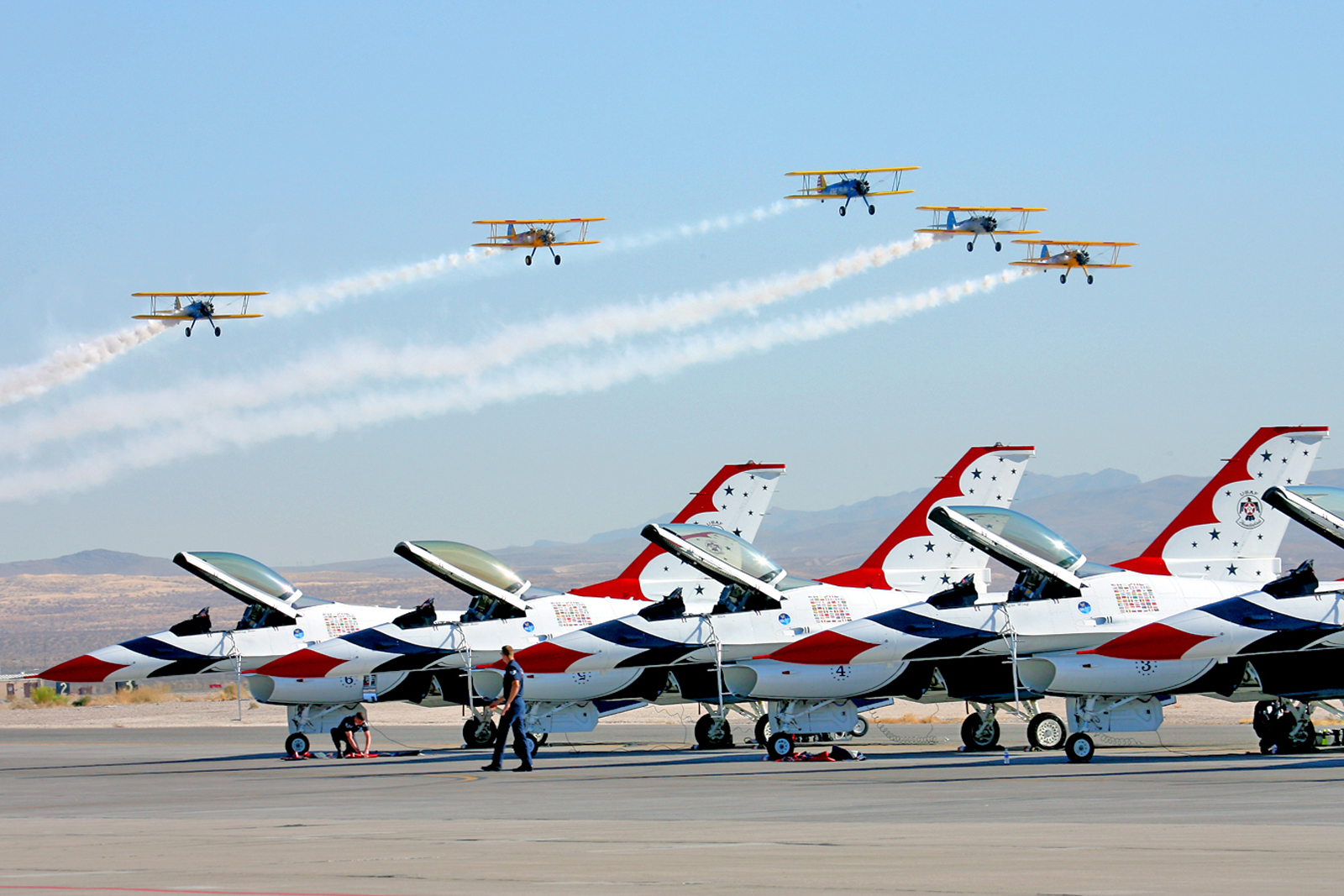