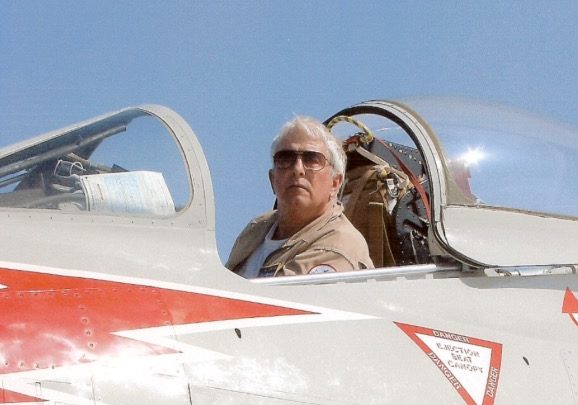 I have a friend of over a half century that shares my abiding love of aviation.  I’ve known him since he had dark hair and I had hair.

His life is more complicated than mine.   My life has been just about airplanes.  His, is as a successful surgeon along with restoring and flying a plethora of magnificent ol’ warbirds.  Rich and Sue are involved in numerous other areas leaving a good many folks indebted to them for their giving ways.

Rich Sugden, MD will be inducted into the Wyoming Aviation Hall of Fame September 19th, 2017.  It was my honor to have nominated him.

My ties to the Wyoming Aviation Hall of Fame go back to 1995 when I was the keynote speaker for the first induction held in the Little America ballroom in Cheyenne.  It was also, the seventy fifth anniversary of the Cheyenne Airport.  That was a pretty heady time for the Walker Bunch.  My Dad, W. Dillard “Pic” Walker, was the first one selected by Red Kelso (founder) for the newly organized Wyoming Aviation Hall of Fame.  Pop, along with his best friend, Ralph Johnson, joined earlybird, Slim Lewis and USAF Gen. Sam Phillips as the first inductees.  Ralph was the sole surviving member of that first selection.  Since that time Wyoming has inducted a single Wyoming aviation stalwart each year since.   Rich will soon join a very select group.

I was introduced by Governor Stan Hathaway.  The Newcomen Society published my remarks.  Such a great honor for me, my mother, and sisters.  This, of course, was tempered by my father’s absence.  Pic had Gone West in March of 1993.  However, prior to his lining up on Runway Two Seven, he did know that he’d been selected.

Cheryl and I look forward to being there when Rich is inducted next month.  It promises to be memorable.

There are so many Rich & Sue Sugden stories floating around I thought you would enjoy a new one.  Just this morning, I happened to see a photo of Rich’s pristine Douglas TA-4J “Skyhawk” taken at the 2017 Oshkosh gathering.  I noticed a very different helmet and wrongly assumed someone else was flying Rich’s “new” bird.  Below is how Rich corrected my mis-perception (keep in mind some school rivalry):

“So I have a very good friend who took his T-28 down to Edwards TPS at the same time we were taking ours, and the Albatross… He is also a rabid Michigan fan ….  I left my helmet in the TPS locker room and asked John if he’d pick it up next trip to avoid having to ship it … and then forgot about it … It arrived a few weeks later at my office and I didn’t bother opening the box … until my nurse said “you might want to take a look…”, as I hadn’t called John back when it arrived … Lo and behold .. a perfect University of Michigan football helmet!! 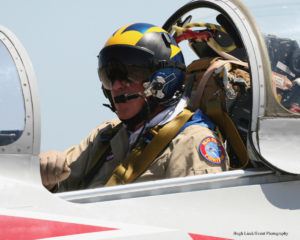 He had it painted professionally at a motorcycle shop …
Not to be outdone, the next time he and his wife came through Driggs, I happened to notice they had their helmet bags in their Bonanza … I pulled the helmets, filled the bags w. stuffing … and later presented them with: 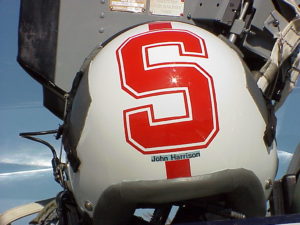 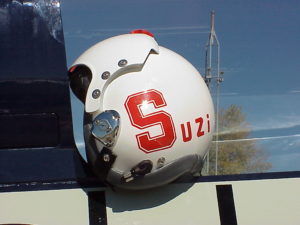 Paybacks are hell!!
I couldn’t believe they didn’t repaint their helmets … but I have quite a few photos of them in their T-28, and later in the L-39 …
Gotcha!!
Rich”
Then, there’s an old story about Rich’s medical practice that persists.  Apparently, Rich doesn’t just deliver babies, he does surgery.   Procedures such as surgically cutting the vas deferens (the duct that conveys sperm from the testicle to the urethra), as a means of sterilization, is one of his specialities.  This procedure is known as ‘vasectomy’ and a very common procedure among men no longer desiring to pro-create.
Four decades ago, when Rich told me of his way of performing this procedure, I thought that was the way to go.  So, with Cheryl sitting in the waiting area, and me laying on the gurney, the process began.  Rich was his usual friendly self, but his nurse was all business.  Any attempt at humor was met with a scowl.  As the story goes, I grabbed Rich by his ‘jewels’ and said “we ain’t going to hurt each other, are we?”  Finally, a rise out of his nurse!  So much of a rise that Cheryl, hearing the exchange, later asked me what that was all about…
On a serious note, it was during the vasectomy when Rich discovered a pre-melanoma mole on my scrotum and removed it.  Likely, he saved my life along with preventing several million spermatozoa from turning into something most likely be to be very troublesome for our delicate universe.
http://tetonaviation.com/warbirds/warbird-collection/ . This website needs updating.  There are more aircraft displayed than shown on the website…  Here are a few: 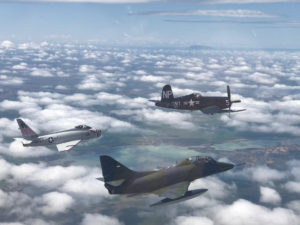 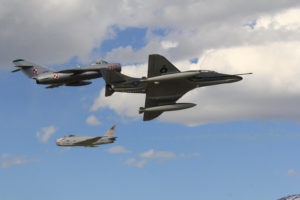 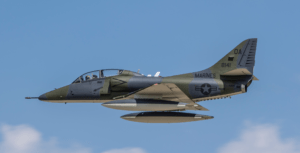 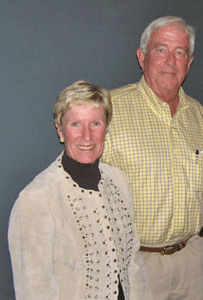 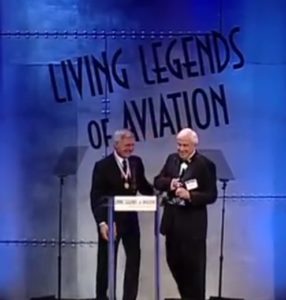 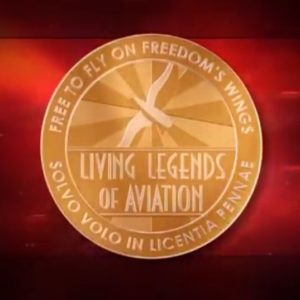 Harrison Ford presenting Rich with the 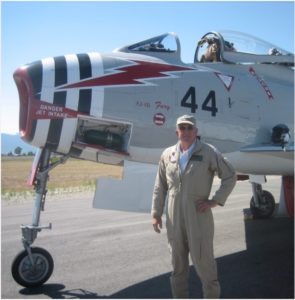 Rich and his FJ ‘Fury’