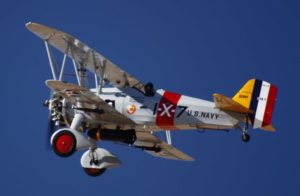 …Stearman’s seem to attract some pretty terrific people. From this special universe I have been blessed with some friendships that seem as lasting as humanity.  Aviation, in general, has been the catalyst. However, the Stearman World seems special in that way.

It has some 120 hours SINCE NEW!  It is magnificently built and amazing in performance!

A great example how aviation is a very special social focal point is, of course, Galesburg. Certainly, Oshkosh, Blakesburg, Sun n’ Fun, Copperstate and Cactus fly-in’s come to mind. Yet, special in my heart is the annual Allen Airways Fly-In at Gillespie Field (KSEE) near San Diego.  Thursday, May 19th aircraft began arriving from all over California, Arizona and Nevada. We planned for a departure Sunday, May 22nd.

Friday’s formation clinic fizzled, but the maintenance seminar was well attended and informative. Our Coast & Bay flight was scrubbed due to a runway closure. Unfortunately, the Planes of Fame 450 Stearman had a bit of a mishap landing. No one hurt but the maintenance folks will get some additional experience with the repairs.Smaller groups made the flight down the coast notwithstanding the disappointment of folks not seeing a huge gaggle of two dozen ancient aircraft gracing the San Diego skies.

Several smaller groups of three/four and five ship fly-overs along with DeFord’s Spitfire were the song of the day. The Allison V-12 makes such beautiful music to compliment our growling radials.

Dinner was excellent followed by an extraordinary speaker, Dana Tibbits, telling us about her legendary grandfather, Vice Adm. Frederick “Trap” Trapnell. Trap was arguably the greatest ever Navy test pilot back in the 30’s/40’s & 50’s. Her book “Harnessing the Skies” was co- written by her father. Already, this book about her grandfather has received rave reviews promising to be a great read.

Saturday, Bob Simon briefed us for the Pauma Valley lunch flight. This was well attended. I chose to make a few smoke-on passes in the Ghost Ship as the Pauma lunch bunch looked up in awe. Ah yes! Noise – smoke – speed!

On the way back I spotted DeFord’s Spitfire heading towards Pauma Valley in the opposite direction. With plenty of clearance, I rolled the Ghost Ship inverted as we quickly passed.  I should have turned on the smoke as Bob never saw me. 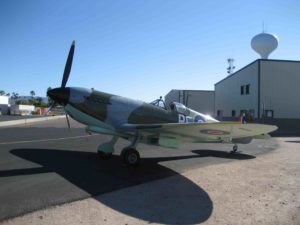 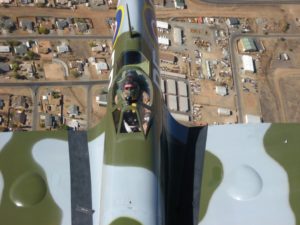 Saturday night’s BBQ was well attended and enjoyed with San Diego’s finest.   Today, May 23rd, I’m sitting here reflecting on having just returned from Bill & Claudia Allen’s magnificent museum where they, again, proved to be aviation’s premier hosts to a gathering of Stearman’s, Ryan’s, a Laird, and, yes, even Bob DeFord’s homebuilt Spitfire.

Air & Space Museum’s Gordon Permann, speaking on early lighter than air in San Diego.  A great evening until I slipped off the Ghost Ship’s wheel pant as I was installing the Tonto cover. Spent the night in the ER and rode back to Arizona in Mike Braegger’s UPF-7. …another “WOW” airplane! 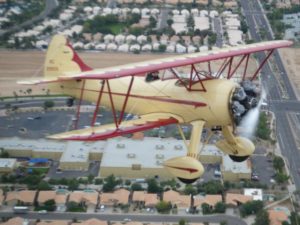 A memory sure to bring future smiles will be my having had the honor of flying Larry Dustman’s Ghost Ship to KSEE, Gillespie Field near San Diego for the Allen Airways extravaganza.

The Ghost Ship, closely resembling a 1930s era Curtis F11C-2 “Goshawk,” gives a whole new meaning to the word “unique!” It takes you way beyond a “WOW!” 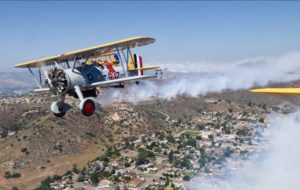 This airplane does it all: MANEUVERABILITY – NOISE – SMOKE – SPEED!   Compared to other bi-planes it is a speedy hot-rod VERTICALLY and HORIZONTALLY! I’ve flown more than 250 airplane types since I soloed on my 16th birthday way back in 1957. The Ghost Ship has become my all-time favorite.

I’ve flown a Mustang, owned a Douglas A-26C (which would out run a stock Mustang) along with a plethora of unique airplanes. Yup! The Ghost Ship has become my “THE AIRPLANE!” 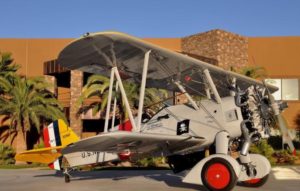 Boeing built the F4B fighter for the US Navy. The Army Air Corps version was the P-12.Back in the ’20s and ’30s Curtis built a similar fighter called the “Goshawk.” John Pike, a well respected Stearman restorer, engineered and built an amazing replica of the Goshawk, from Boeing Model 75 “Stearman” parts. 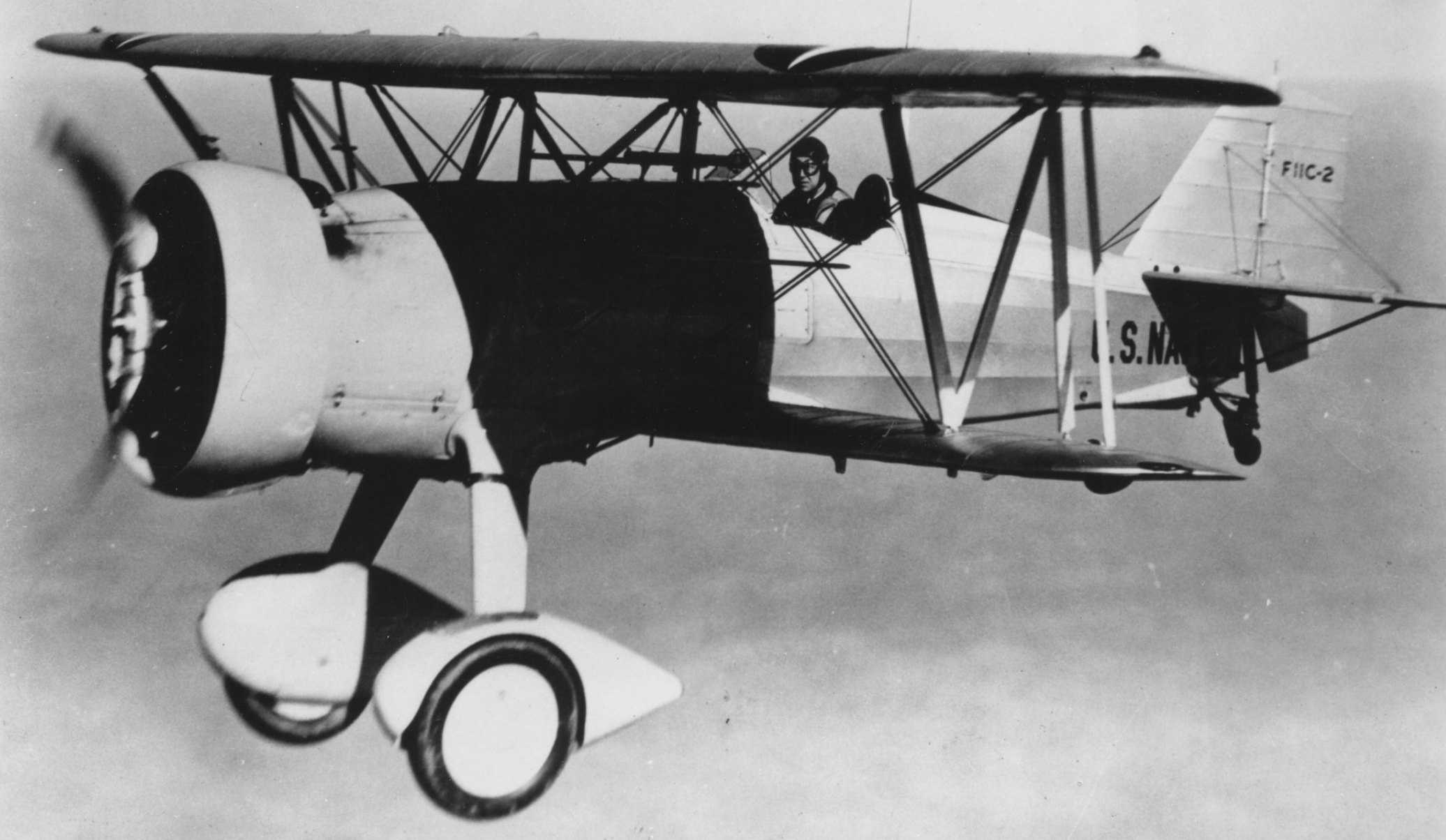 N-29XF is certainly a look-alike. So much so that many have thought “The Ghost” was an original Navy fighter!  One ancient aeronaut, Brian Baker, thinks it looks like a Curtis F11C-2 “Goshawk!” I agree.

The two photos above certainly lend credence to how much N-29XF looks like the “Goshawk!” 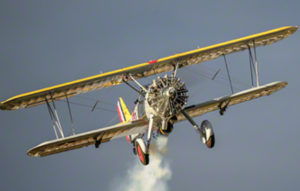 John Pike said, following his first test flight in N-2XF, “The only purpose of this aircraft is to make a lot of noise and lots of smoke. The noise is perfect recreating the sound of early biplane fighters with short exhaust stacks. I just need to find an aircraft carrier I can get qualified on!”

Pike started constructing his uniquely one-of-a-kind dazzling aircraft in 1990 at his Oregon City facility “Big Sky Aviation.” There he began to assemble a number of surplus Boeing 75 parts beginning with a fuselage and some of his famous Big Sky wings. Just twenty years later the Ghost Ship had it’s certificate of airworthiness.

Fuselage bulkheads were fabricated producing the shape that created the F4B or Goshawk shape. The landing gear was re-shaped with Fisher 32X6 wheels supporting Ford Model A tires. The tail wheel is a solid rubber Stearman tail wheel popular on many stock Stearman’s.

Next, Pike carved wooden frames to form aluminum wheel fairings just like those of the early era aircraft. Ten years after the start of this labor of love, Pike was fitting customized panels and other metal components to the airframe. It was beginning to look like the airplane Pike had flying around in his very inventive mind.

By now, Pike was taking standard Stearman model 75 wings and re-working them which resulted in shortening each lower wing a foot and a half to create a sesquiplane. He added a couple of 12 gallon auxiliary wing tanks. Each would be mounted in the upper wing separated by the main 46 gallon tank.

Four ailerons were constructed with balance tabs on the lower ailerons. The larger squared rudder was further modified with an adjustable tab. Everything was reworked knowing it would be a much faster, heavier, albeit more maneuverable airplane. Flying the Ghost Ship causes my admiration for John Pike to grow even more. This is a well thought out and engineered aircraft. Larry Dustman’s improvements have been a real plus as well.

The 10 gallon oil tank sits aft of the pilot. The 12 volt battery is in the far aft fuselage. It is a very well balanced aircraft. There is even a 12 V Booster Battery installed in the baggage bin.

Eventually, Pike would add a replica bomb beneath the center fuselage that would hold an extra 32 gallons of gas. This is the only criticism I can come up with! The bomb is too close to the exhaust stack and oil cooler. It is likely OK, but I’m just not comfortable using it as auxiliary fuel albeit there is a well designed transfer system to move that fuel to the main tank where it would gravity feed as do all Stearman’s.

Additionally, Pike installed a header tank of some five gallons to keep the fuel injection running for several minutes during inverted flight. Of course the oil system is pressurized for inverted flight as well.

Pike adjusted the R-1340 for a maximum power setting of 32″ and 2100 RPM’s roughly climb power for the Pratt & Whitney. Undaunted, Dustman had Dave Goss (GossHawk Aviation, Casa Grande, Arizona) adjust the power to 35″ and 2250 RPM. Just when I thought it couldn’t get better it did!

This Pratt & Whitney’s R-1340 maximum setting is 36″ at 2250 RPM. So, the Ghost Ship is still an inch shy of the maximum. But, you know what? 35″ is PLENTY! The ship is airborne with the throttle half way and you feel like you are going straight up by the time the throttle is full open! Did I already say this is a “WOW” airplane!

I was surprised with the ease of handling from the start up thru taxiing in from a no-sweat landing where I discovered the airplane tracks straight with ease. The “Ghost” lands equally well in a three-point as the wheel landing. The four ailerons are noticeably more effective as one might guess. This makes cross-wind landings easier than the stock Stearman (especially with the shorter lower wing).

The Ghost Ship, while heavier than the stock Stearman, is nice and light on the controls. However, is does not float like it’s lighter “cousin.”

I have found good over-the-nose visibility turning final at 100 MPH indicated. The Stearman drag bleeds the speed off nicely for an over-the-threshold-speed of 85 MPH. Touchdown is 70-75 MPH. Throttle fully closed will normally cause a slight skip whereas a skosh of power will squeak it on every time. Did I already mention how easy the Ghost Ship flies!

Landing at KSEE May 21st I had a gust grab the airplane at touchdown. I was able to correct to an ugly but good 20 knot crosswind landing. In that case I thought the extra weight along with the shortened lower wings were an asset. Landing on the upwind wheel adding a skosh of power and the airplane made me look better’n I was!

The usual front cockpit found in stock Stearman’s, with dual controls, is hidden by a nifty cover that is fastened by Dzus buttons. It is easy to remove along with adding a Dzus fastened front wind screen and, presto, you have a two place airplane. A nifty Spitfire-type drop down door makes it an easy entry/exit to/from the front cockpit. That’s me holding the left wing down with just one arm! 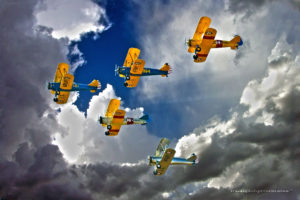 Dustman (www.stearman181.net) has another Stearman, an award winning restoration of anactual WWII Thunderbird Field PT-17. He also sells many desirable aftermarket supplies for the Stearman thru his website. Dustman’s home, business, and hangar are located at Stellar Airpark (P19), Chandler, Arizona. Until he sells the Ghost Ship it will be on display at Airbase Arizona KFFZ – the CAF Museum.

Hard to imagine Stearman 181 could be improved over Jack Pollack’s immaculate restoration, but it is so!  Below, Jack with what, later, became Stearman 181: 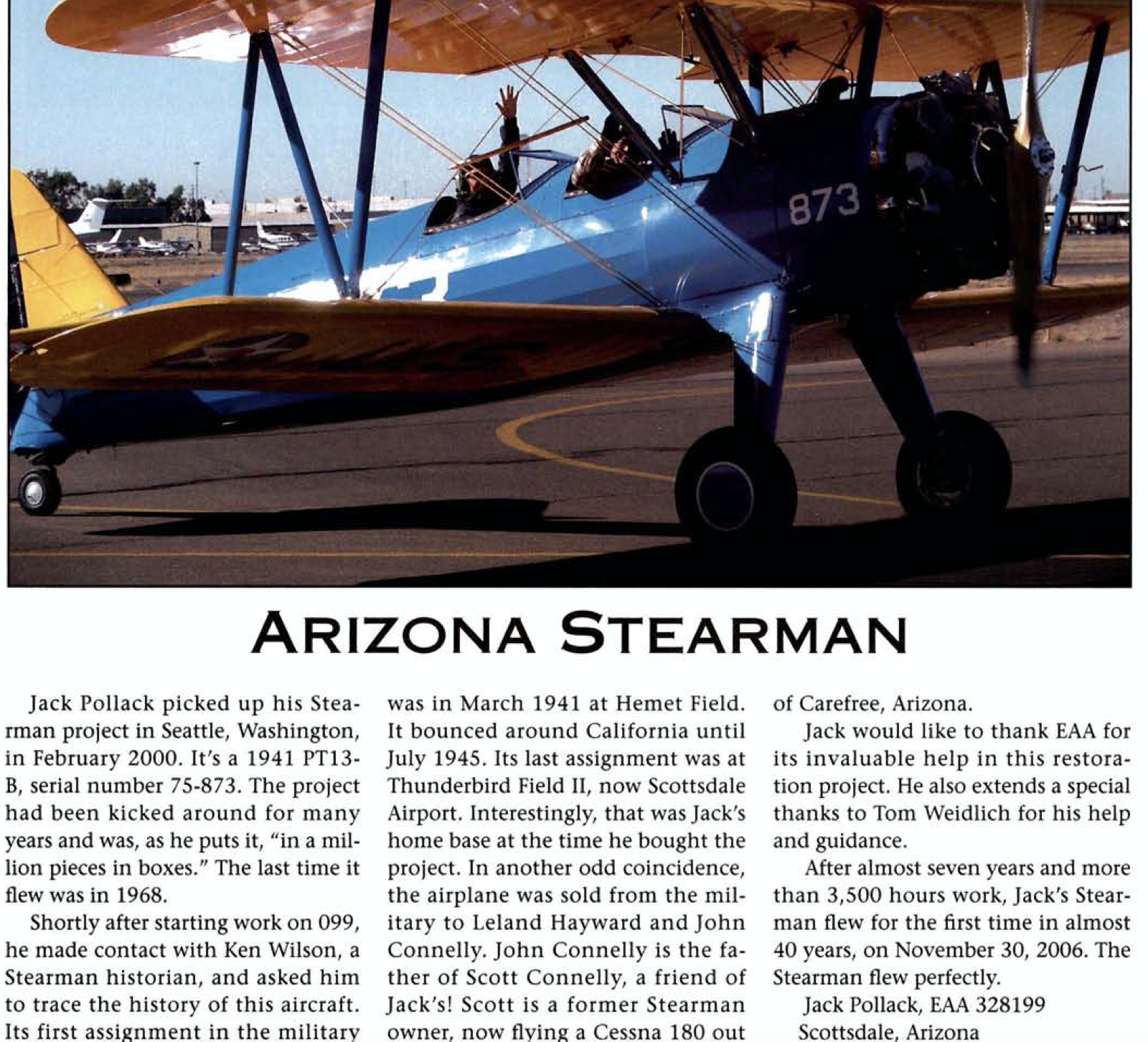 When I restored my N2S-3 it was at Dustman’s hangar with IA Lance Winter’s talented efforts (along with Larry Dustman himself making sure I didn’t cut any corners). Good thing too! N-47964 won three first place awards along with “Best of Show” at Midland, Texas. I sold 964 to American Heritage Airpower Museum. I reckon I’m like the ol’ prostitute! I sold it, but still got it! At least initially, and for nearly a decade, I flew 964 more than when I owned it! 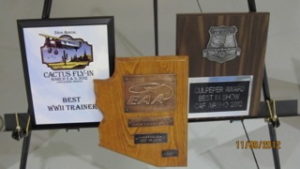 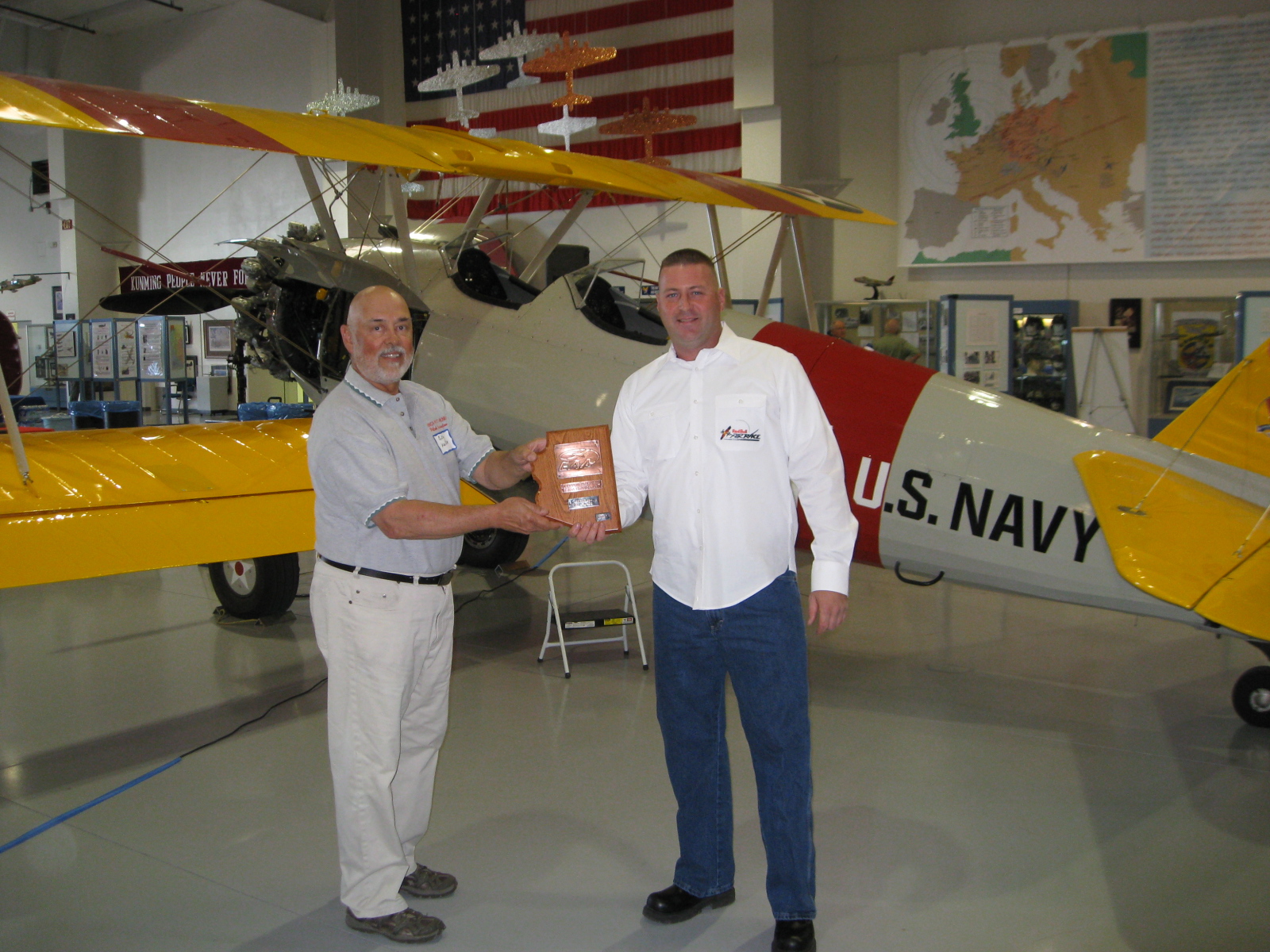 Larry Dustman and I are part of a group of intrepid aviators who fly formation flights, smoke-on, to honor our nation’s veterans. Memorial Day; Veterans Day; and the Missing Man at special occasions is our main mission. Often, you will see us overhead flying to the sound of Taps at the National Veteran’s Cemetery. 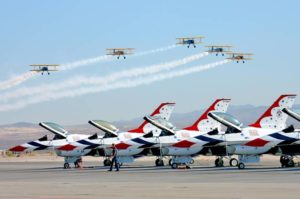 The Ghost Ship promises to be the “Daddy of ‘Em All” flying in the Number 3 position in our Missing Man Formation. At Lead’s signal, powering up and simultaneously pulling up as the smoke comes off with the Ghost Ship turning West.

OH MAN is this airplane fun to fly! 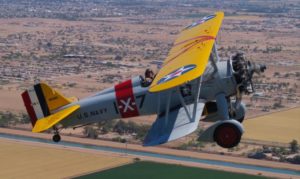 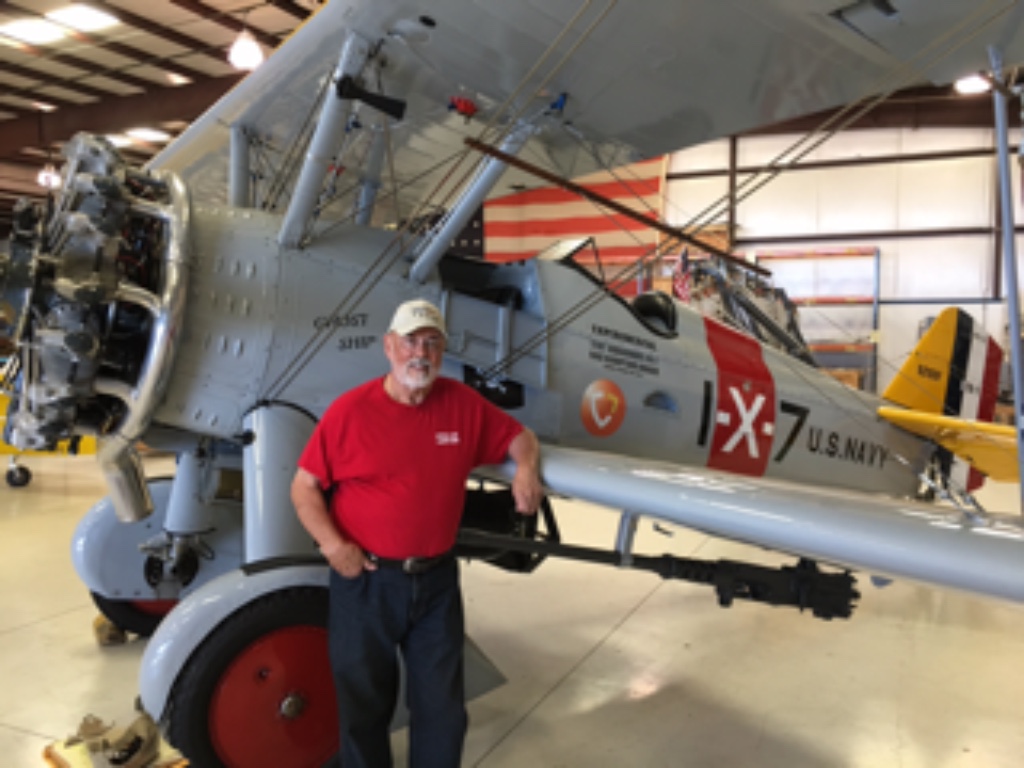 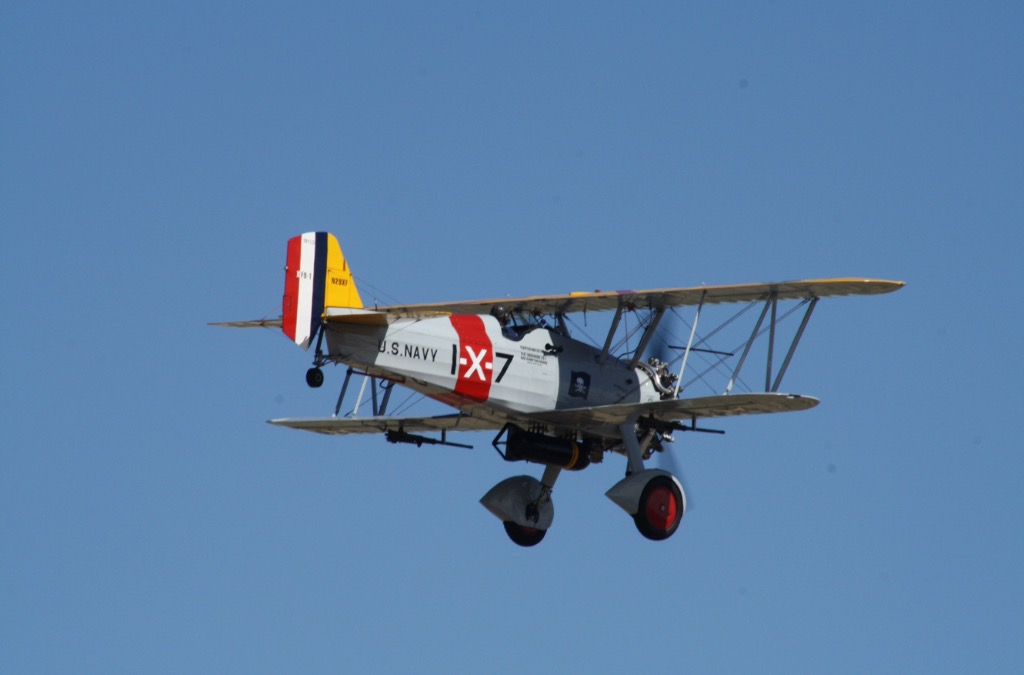 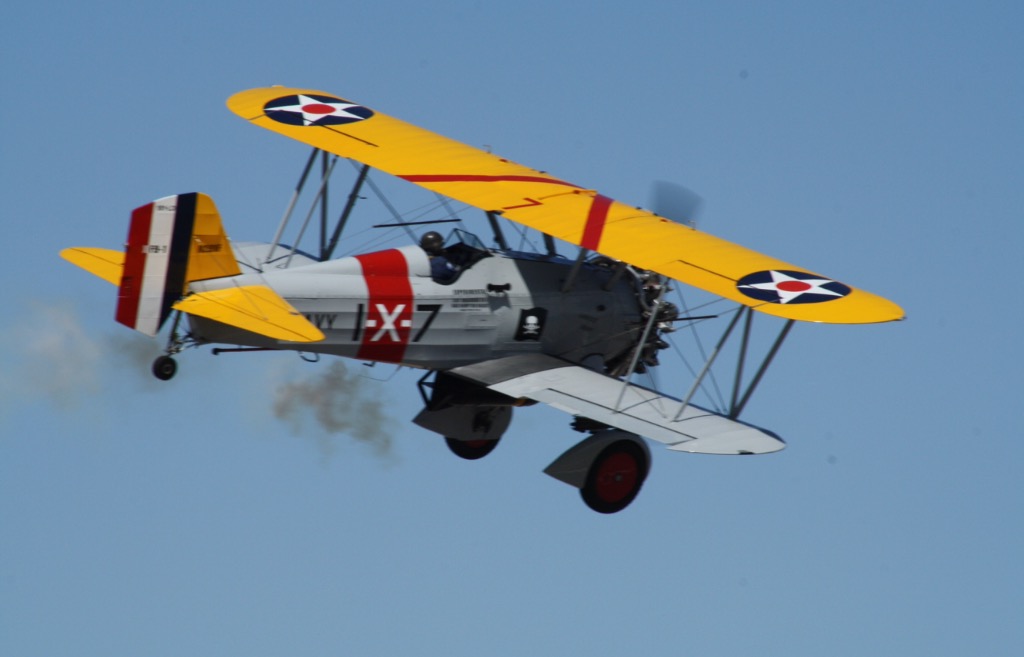 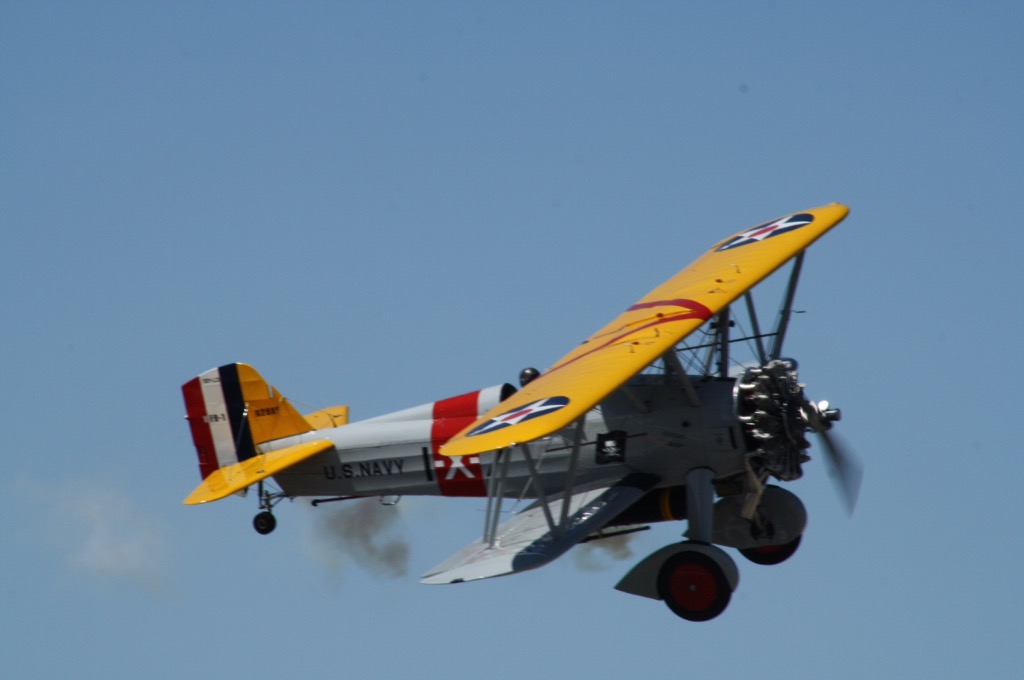 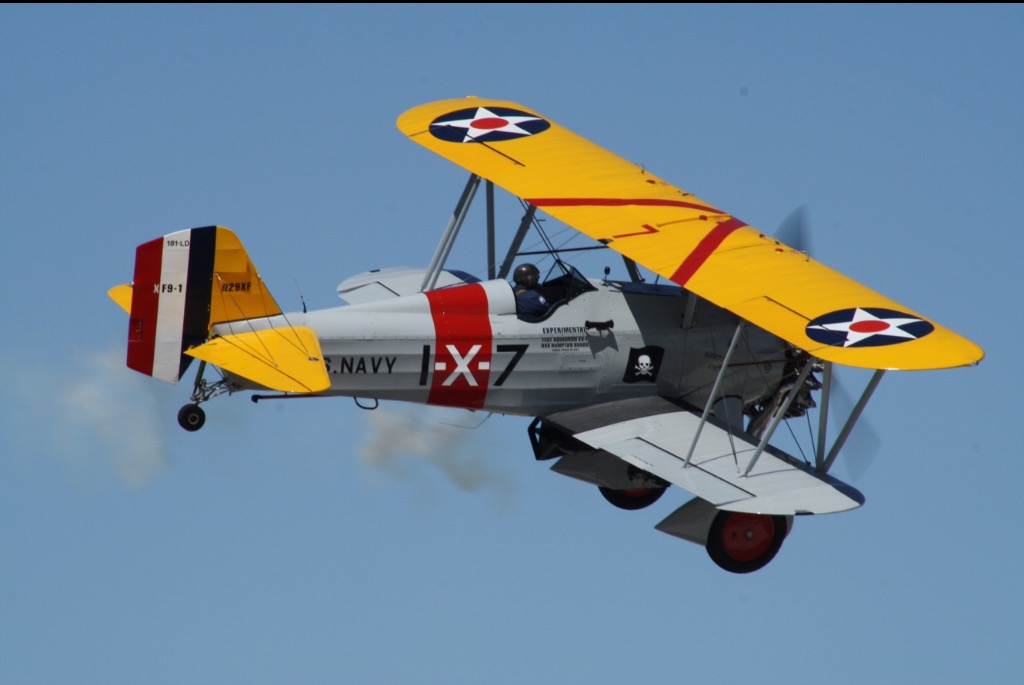 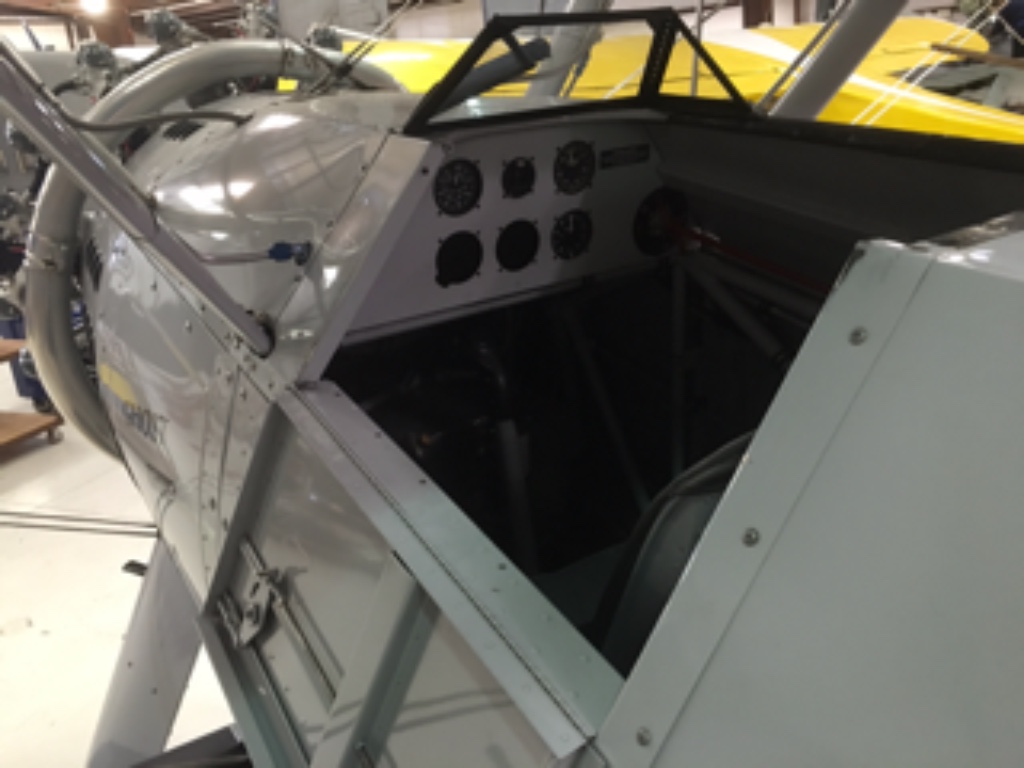 Less than a minute and a half to switch from single-seat to full dual control flying.  Slick! 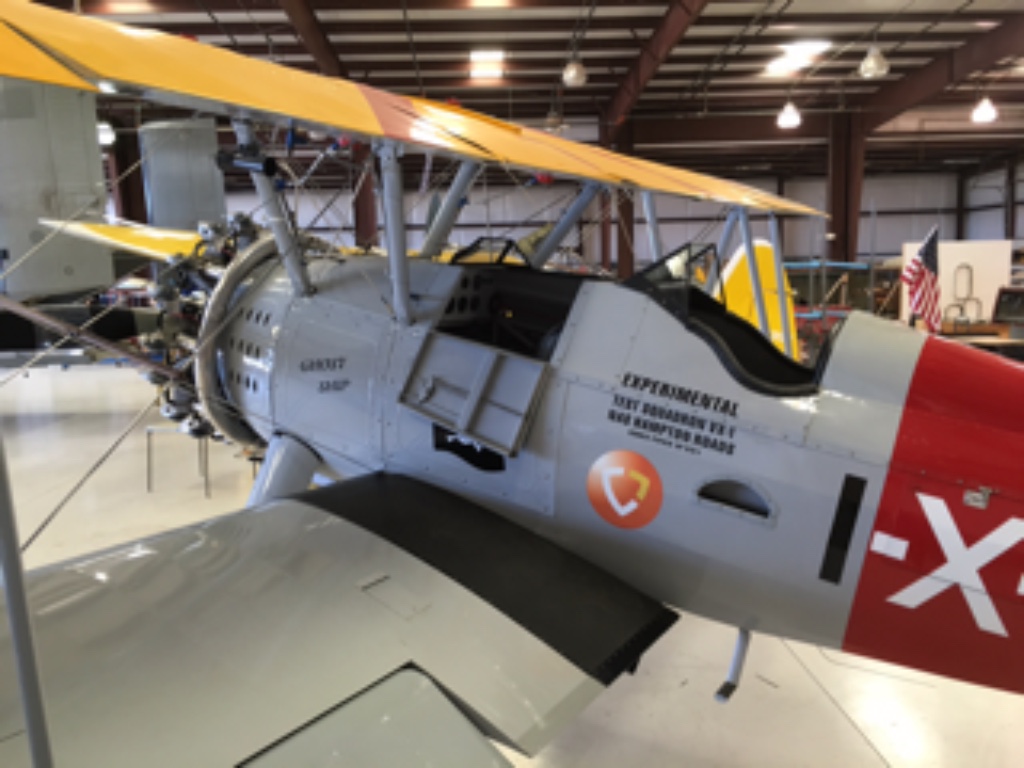 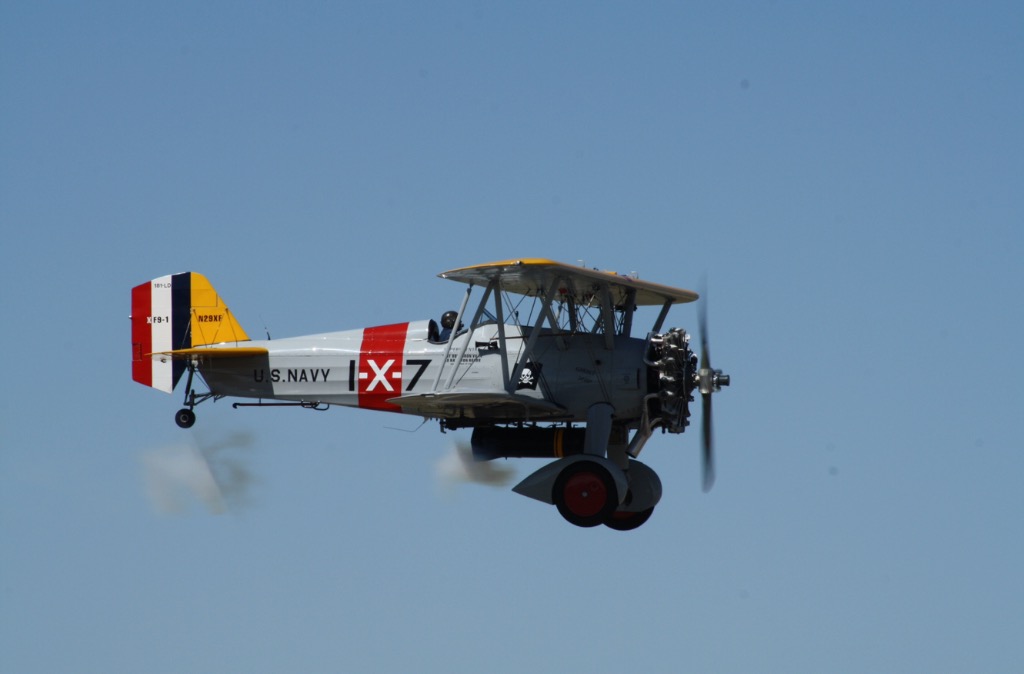 Call me if you have any interest in this extraordinary aircraft. 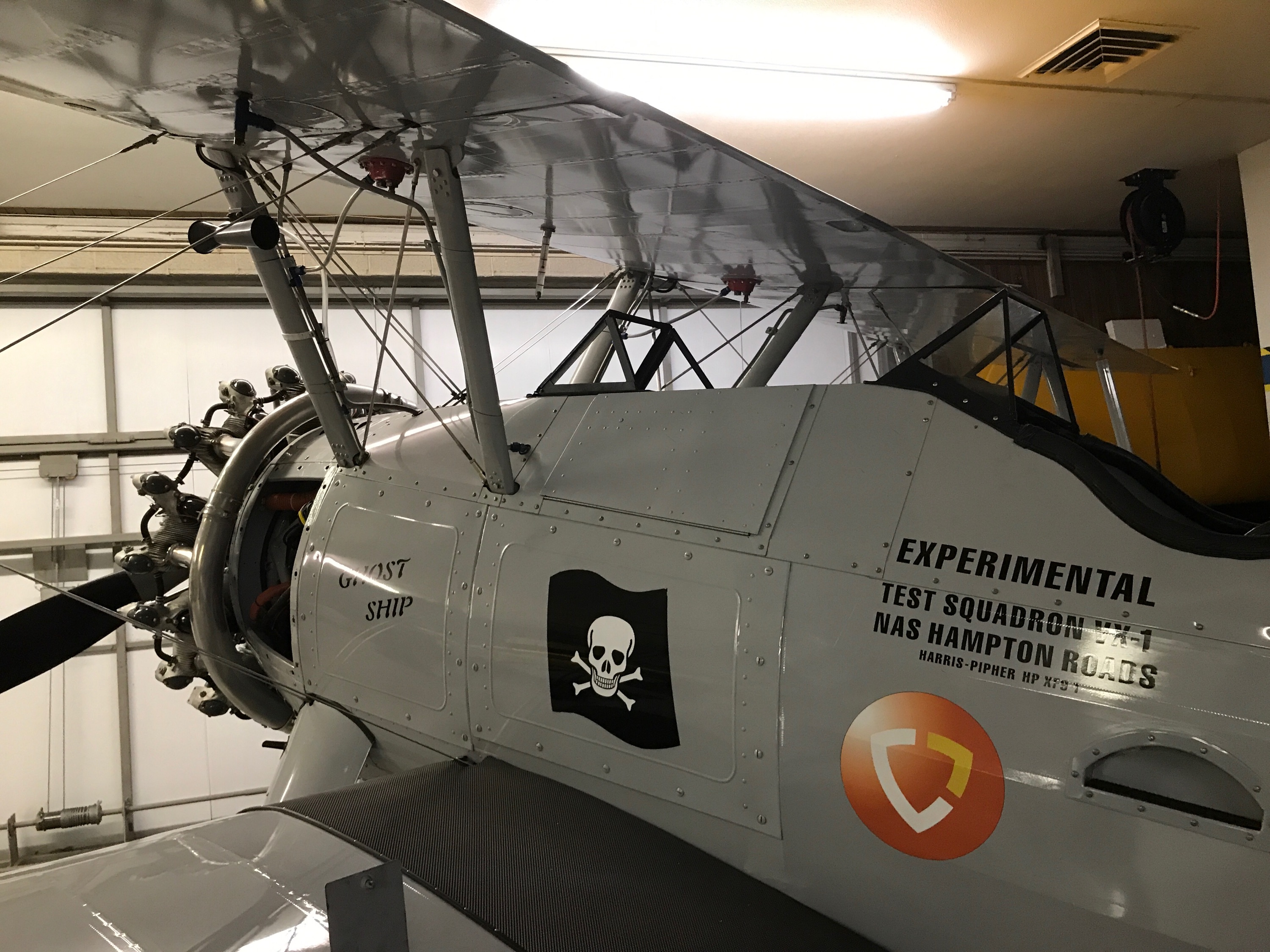 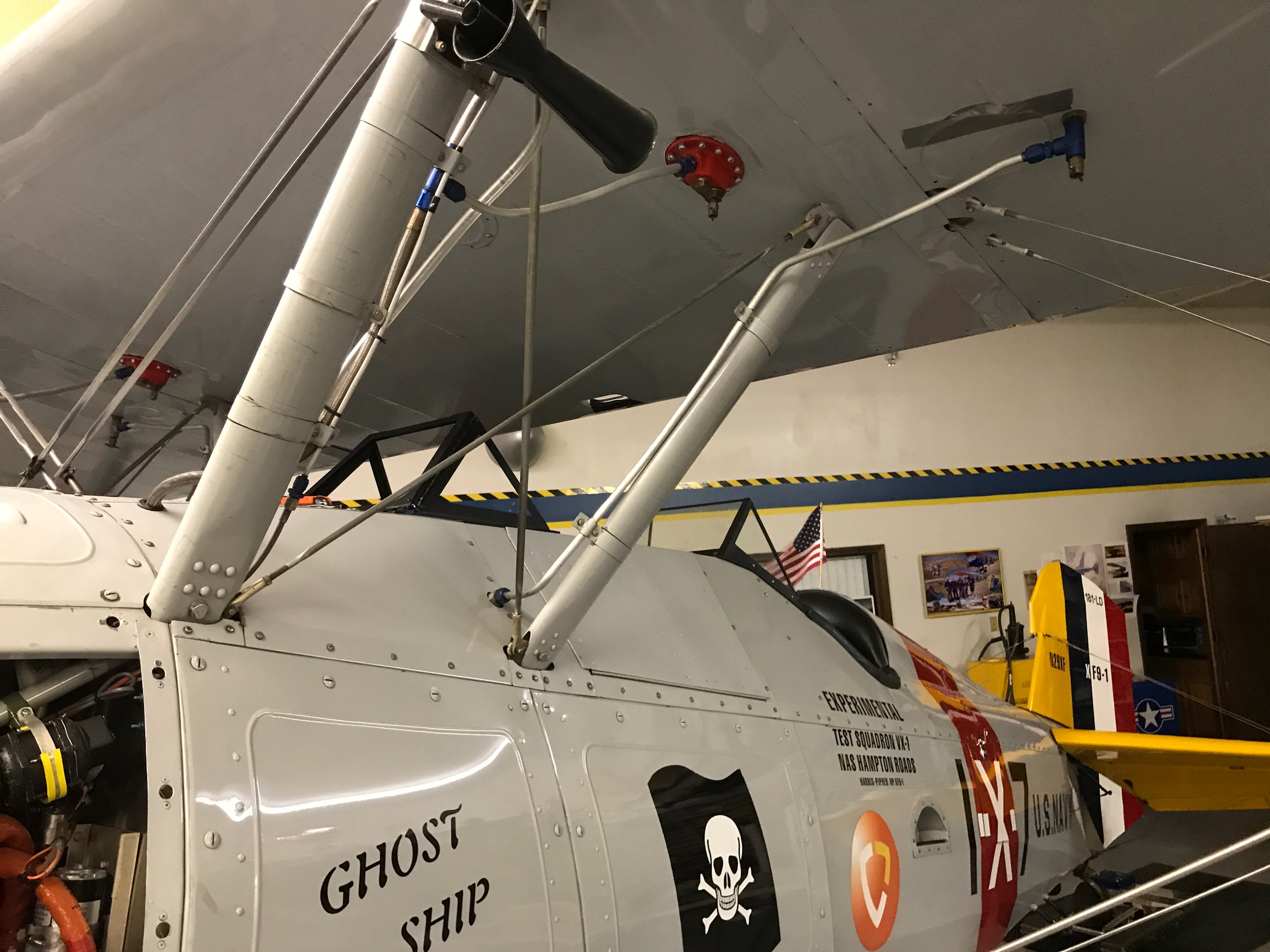 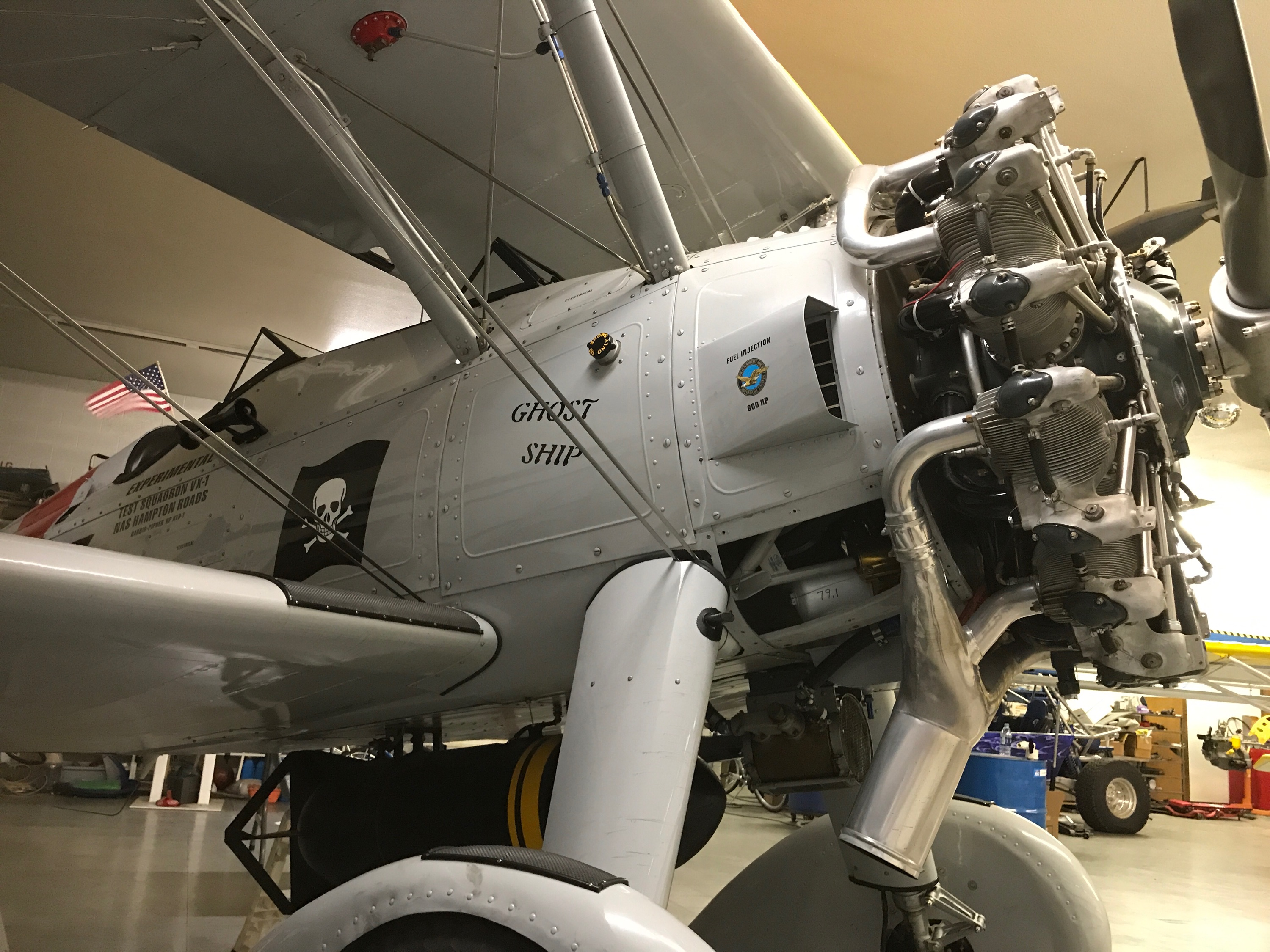