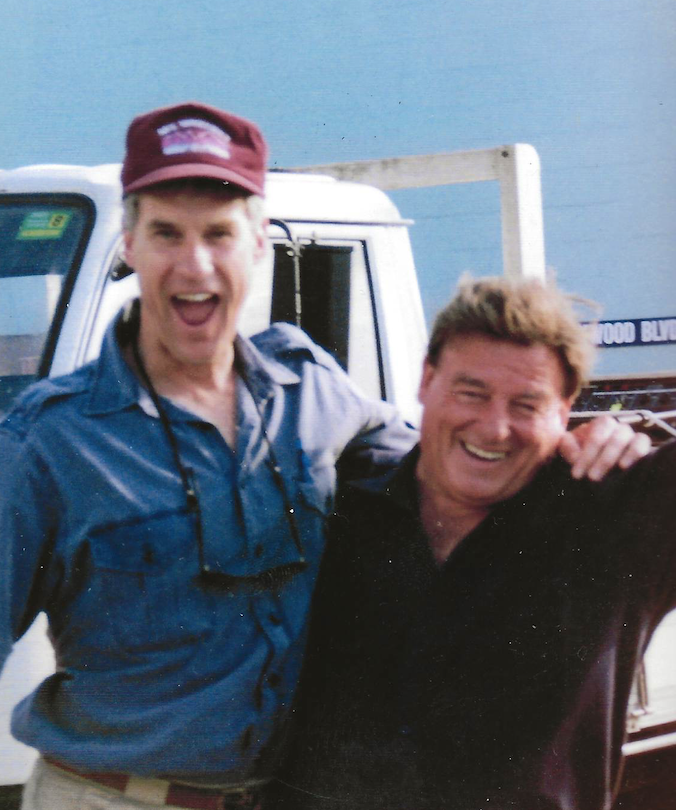 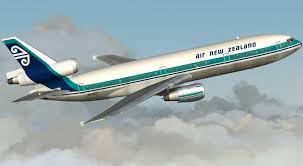 Imagine flying for more than 14 hours non-stop over the Pacific Ocean. …in a small single place – single engine aircraft. You see nothing but the blue of the ocean around you. You try to contact your landing airport… Nothing. Then you realize you are lost in the middle of nowhere… and you’re in a very small Cessna agplane. Your only hope is the determined Captain of a commercial flight nearby (or believed to be) to help you. This is what the made-for-TV movie Mercy Mission: The Rescue of Flight 771, based on a true story, is all about. It was presented in many networks worldwide. It has been introduced in Australia and New Zealand under the name The Flight from Hell.

I worked with Captain Jay Prochnow at good ol’ America West.  He was a great guy, a really good fellow who is additionally an excellent pilot.  I don’t know anyone who doesn’t remember Jay Prochnow in the best light!

When I first wrote Jay’s story he was alive albeit suffering from Prostate Cancer.  He survived a long time.  Now, sadly, Jay has Gone West… I miss him!  I miss our occasional lunch visits.  I miss him being with our Cactus Crews (retired America West flight crews).  I’m among many who miss this extraordinary fellow…

A movie was made of his flight delivering a Cessna model 188 “AG Wagon.”  Had the producers and director availed themselves to technical advisors it could have been a really “WOW” movie.  Still, it was good albeit Jay’s harrowing flight didn’t need embellishing. 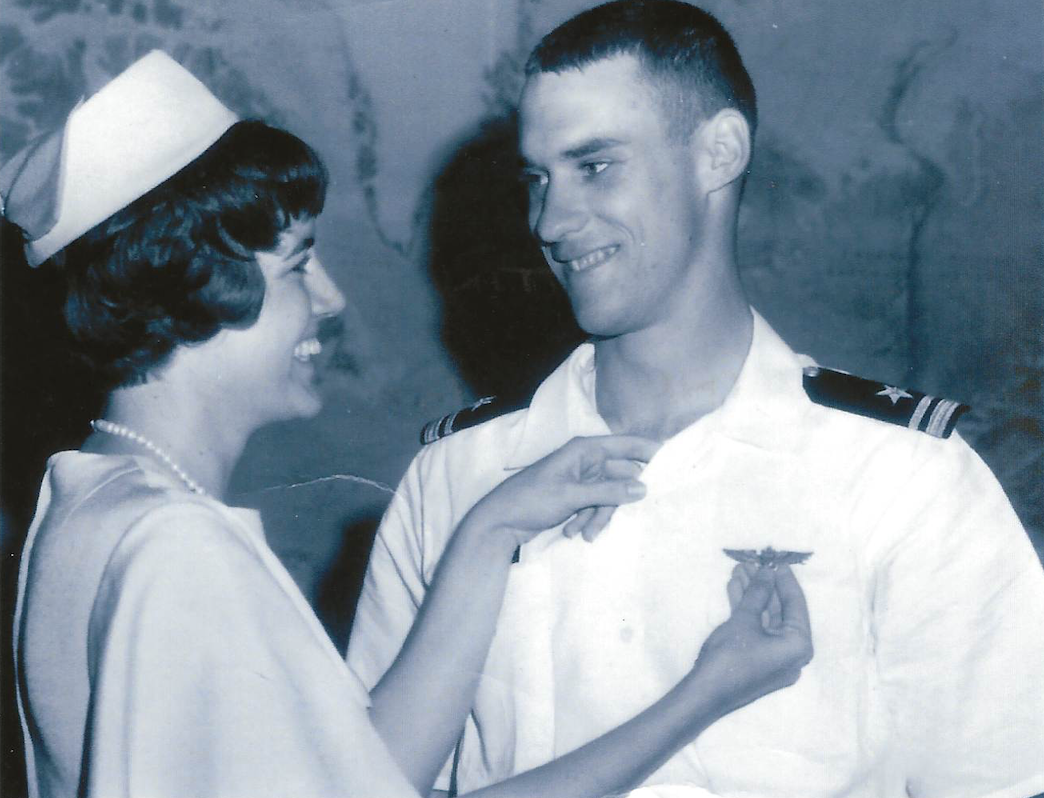 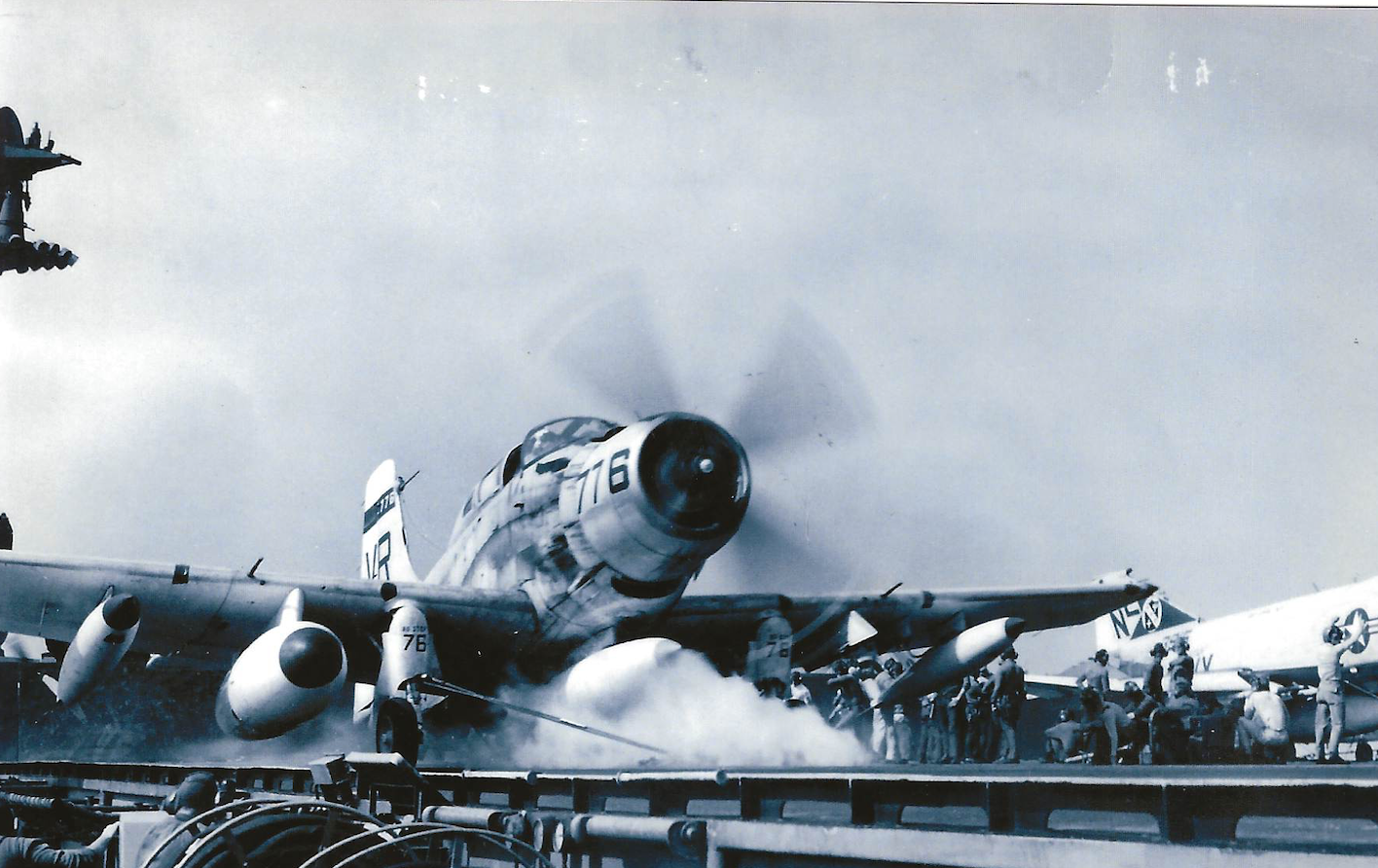 BELOW:  Jay’s Douglas A-3 “Skywarrior”

…pilots nicknamed the A-3 “The Whale” as it was a HUGE aircraft to operate from a carrier deck! 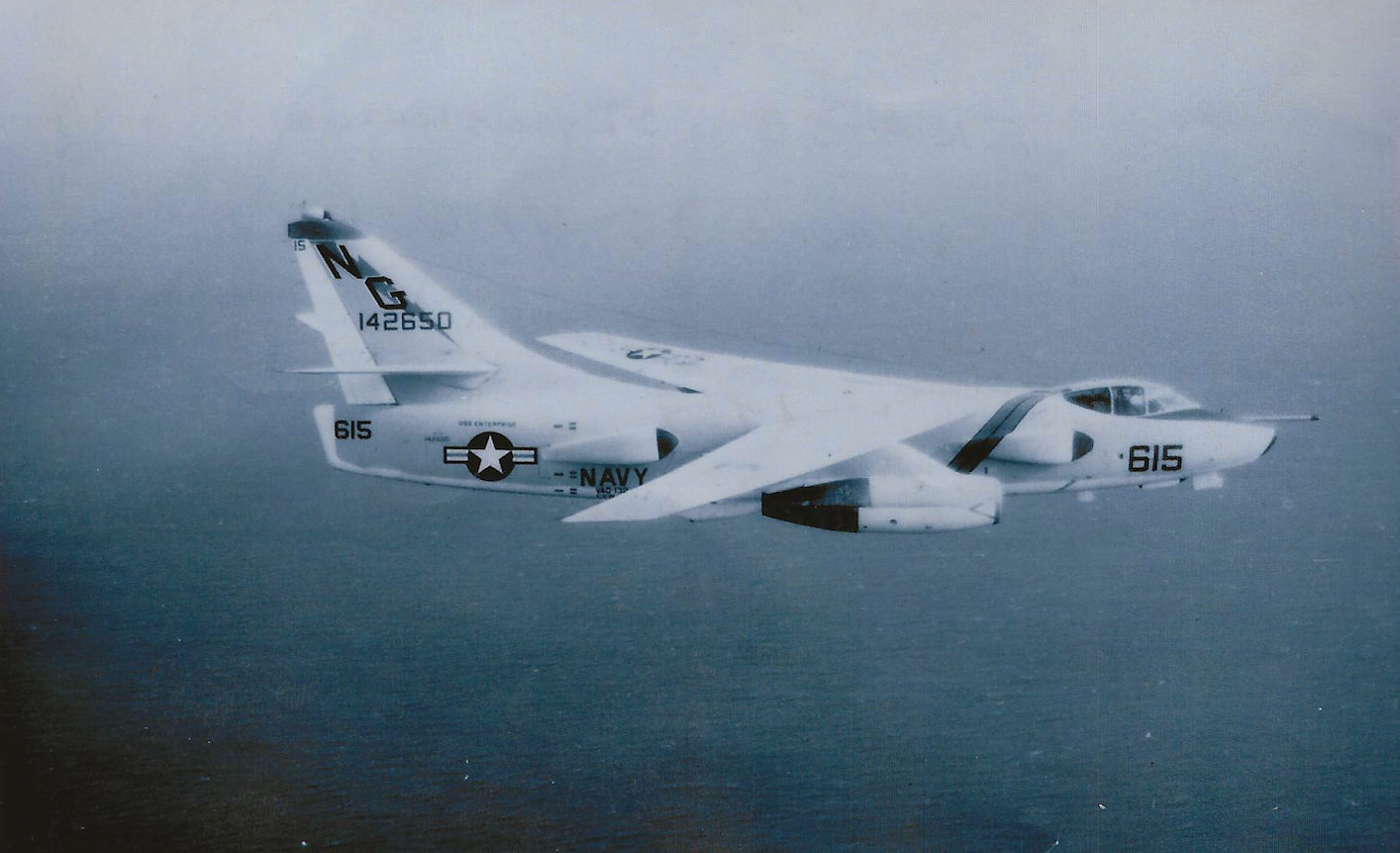 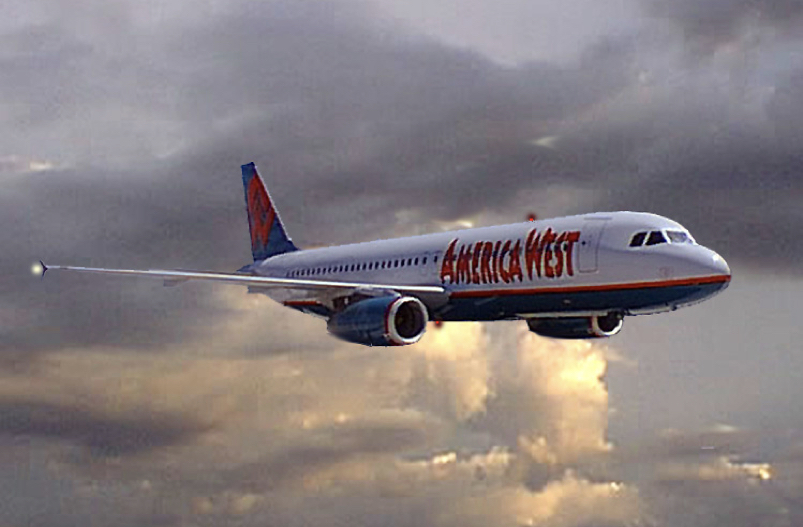 Jay Prochnow, a retired US Navy pilot, was delivering a Cessna 188 from the United States to Australia. Prochnow had a colleague who was flying another Cessna 188 alongside him. The long trip would be completed in four stages. On the morning of 20 December, both pilots took off from Pago Pago. His colleague crashed on take off, but was unharmed. Prochnow landed and set out the following day to Norfolk Island. 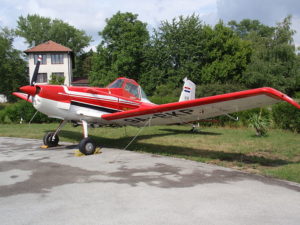 When Prochnow arrived at the region where he believed Norfolk Island was, he was unable to see the island. He informed Auckland Air Traffic Control (AATC), but at this point there was no immediate danger. He continued searching; after locating more homing beacons from other islands, he realized his ADF (automatic direction finder) had malfunctioned and he was now lost somewhere over the Pacific Ocean. He alerted AATC and declared an emergency.

There was only one aircraft in the vicinity, Air New Zealand Flight 103, a McDonald-Douglas DC-10 travelling from Fiji to Auckland. The flight had 88 passengers on board. The captain was the late-great Gordon Vette,* the first officer was Arthur Dovey, and the F/E was Gordon Brooks. Vette knew that if they did not try and help, Prochnow would almost certainly die. Vette was also a navigator, and at the time of the incident he still held his license. Furthermore, another passenger, Malcolm Forsyth, was also a navigator; when he heard about the situation he volunteered to help. As neither Prochnow nor the crew of the DC-10 had any real idea of where the Cessna was, the crew had to devise creative ways to find it. By this time, contact between both aircraft had been made on long range HF radio. Prochnow had crossed the international date line, and the date was now 22 December.

*Captain Vette had been involved in two separate aviation experiences that were made into movies! 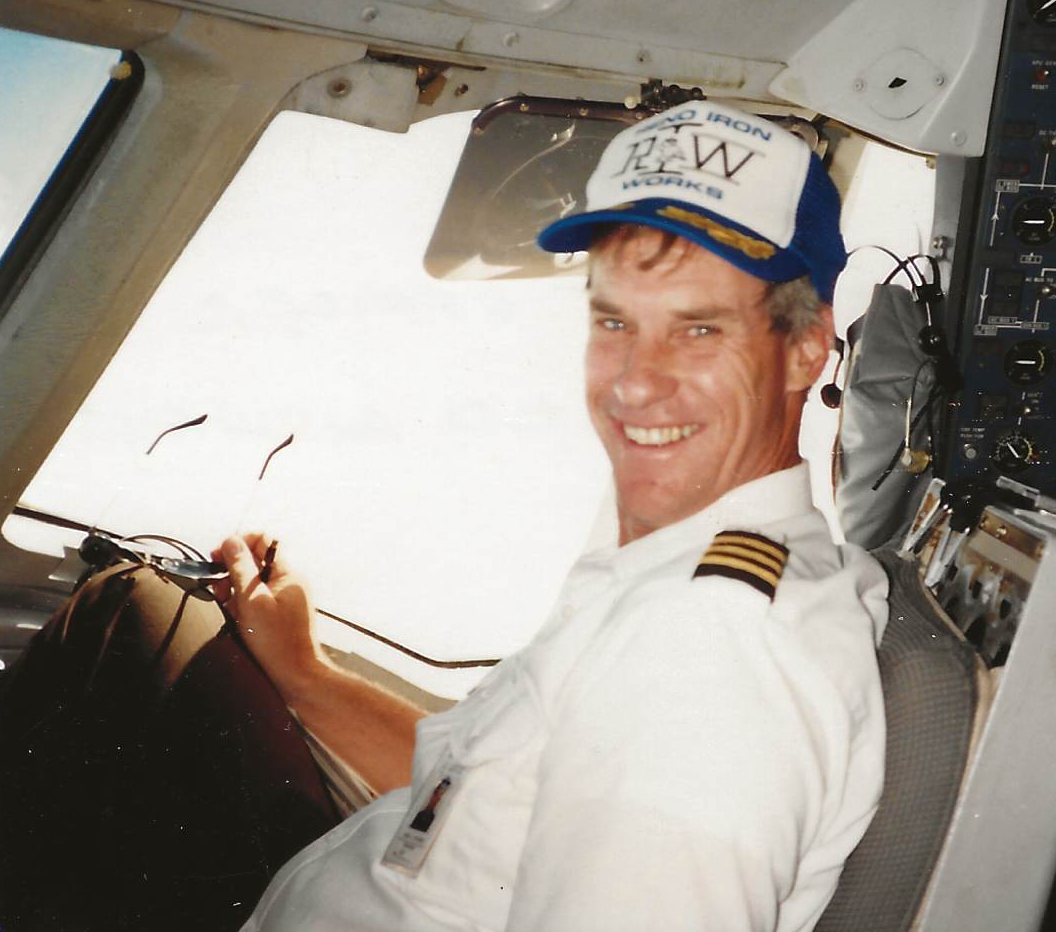 ABOVE:  Jay as an America West Airlines Boeing 747 co-pilot

The following was pulled off the internet and is a well researched synopsis of Jay Prochnow’s Harrowing Flight:

Movie Plot Summary:
Jay Parkins (Prochnow) played by Scott Bakula, is something of a daredevil flyer. At the beginning of the movie, he is making, along with his flight partner Frank (Alan Fletcher) a helicopter crop duster demonstration, as he is flying too high, the farmer in charge asks him to fly lower. So he does… almost touching the ground and right after, passing under… a bridge with the helicopter. You guessed it, they got fired!

Back at home in San Francisco, Jay meets his wife Ellen (Rebecca Rigg), pregnant, and they make a lot of projects for the baby who spends his time resting or… kicking! In the meantime, Gordon Vette (Robert Loggia), Captain for Air New Zealand, does an energic complain to his superior about his friend, First Officer Ross Mann (Michael Bishop), who has not yet been promoted as a Captain. Gordon is a veteran and has been working for 33 years on Air New Zealand. He plans to either retire or BE retired, and have more time with his wife (Sarah Kemp).

Meanwhile, Jay and Frank are called by Harry Hanson (Robert Benedetti), their supervisor, for a very special flight. They will be in charge of delivering two crop dusters to Sydney by Christmas. They will have to fly the leg by making stopovers at Honolulu, Pago Pago, Norfolk Island, and finally Sydney. The trip seems dangerous, but Hansen reassures the pilots, telling them they are experienced with this kind of situation. And it sounds like a very lucrative assignment.

Jay goes back home and discusses about it with his wife, who doesn’t seem to agree to put his life in danger just for the money. After many vain reassurings, Jay finally flies the morning after with Frank, who takes off quite roughly because of the fuel quantity higher than usual in the wings. Both pilots will be guided by the ADF just installed on both planes… with masking tape!

The flights to Honolulu and Pago Pago are very smooth. On Christmas morning at Pago Pago, Jay, piloting the Cessna registered as N30771 (callsign Cessna 771), takes-off with no major problems. But Frank cannot lift the plane. He reaches the end of the runway, stalls and crashes in the sea near the airport. Frank is okay and escapes before the torn Cessna turns into a fireball. Jay doesn’t want to fly alone anymore and proposes, by radio, to stop the journey and get back to San Francisco. Frank disagrees and convinces Jay to fly lonely to earn the money for the baby. He finally does, but unaware of a “small” problem. 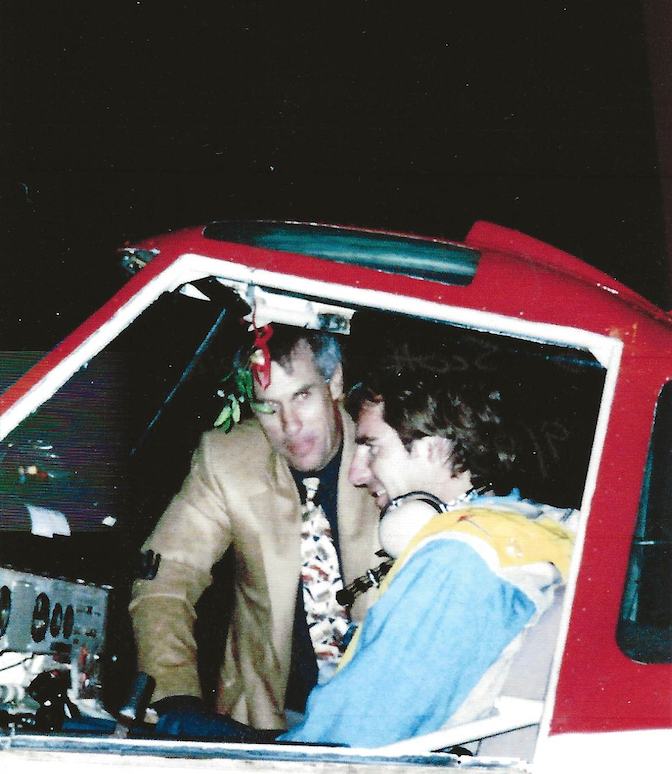 ABOVE:  Jay with actor Scott Bakula in the cockpit of a Cessna Agwagon

BELOW: Safely on a Pacific island 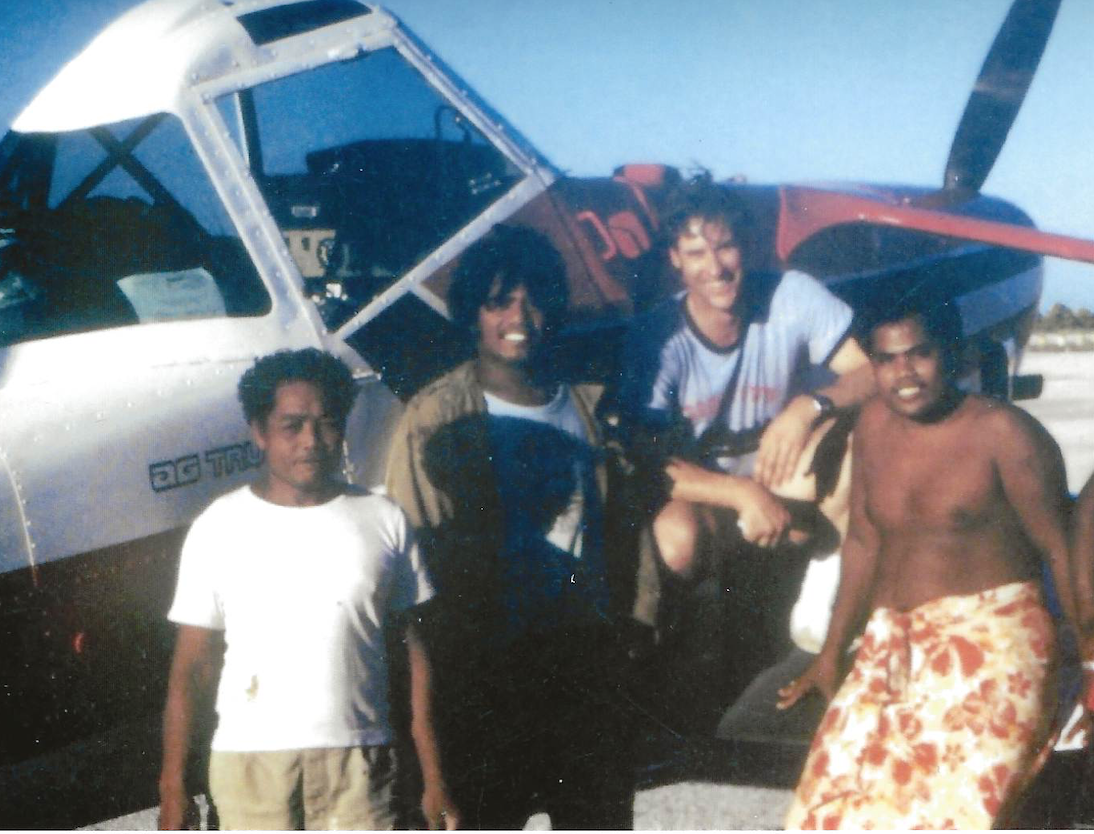 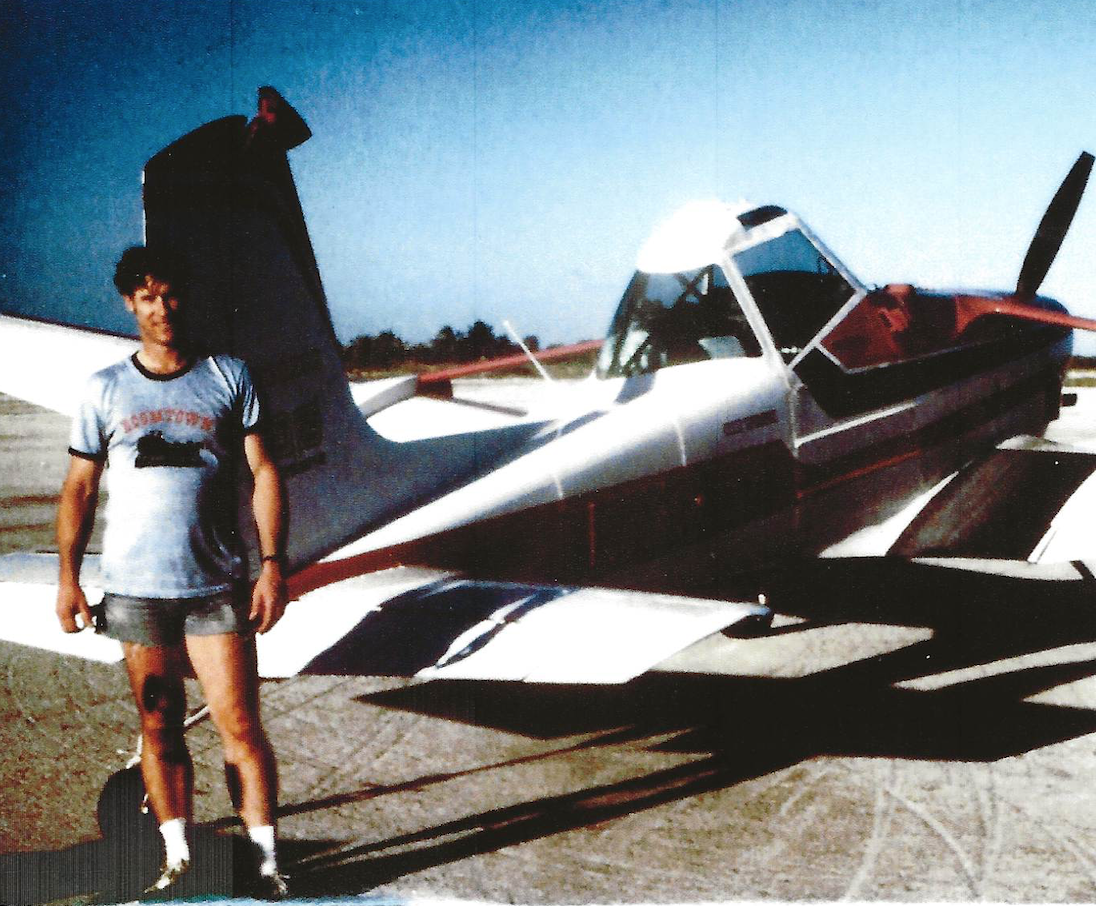 All in a day’s work!

Somewhere else, a little later, Air New Zealand flight 308 is on final boarding process at the Nadi International Airport in Fiji. A group of children travelling with their chaperone “invades” the jetliner, but besides that, it is very calm with only 88 passengers. Among the flight crew, there is Captain Gordon Vette, First Officer Ross Mann and Captain Warren Banks (Kit Taylor) on the two-hour ride to Auckland. Flight NZ308 finally takes-off quietly and climbs to cruising altitude.

At the same time, Cessna 771 is supposedly flying over Norfolk Island, at North of New Zealand. Jay tries to contact Norfolk Tower… but nothing. No answer. He looks at the ADF and the needle indicates the same heading he is flying into, near South West. But he pushes the glass and the needle spins to a new heading. This can only mean one thing: the ADF was not working properly and Jay has diverted from his original route. He contacts Auckland Center on his HF radio to find some help.

The rescue planes are far away at Auckland Airport and they are not able to leave at the moment. There are no ships nearby. The only plane in the air space is Air New Zealand flight 308. Auckland Center contacts 308 to ask for help, and Capt. Vette agrees to give a hand to the young lost pilot. After a few discussions with him by radio, telling him to save what’s left of fuel, he convinces his flight crew and his passengers to divert the flight and find the pilot.

The problem is that NZ308 is a commercial flight not equipped for the situation. With rudimentary methods, such as the sun orientation and the VHF radio (with a range of 200 nautical miles), the search is hard. Jay slowly loses any hope and is seriously thinking of landing on the water. But if he does, he won’t be found and he is most likely doomed. Will Jay be found by NZ308 before it’s too late? Rent the movie for more details! 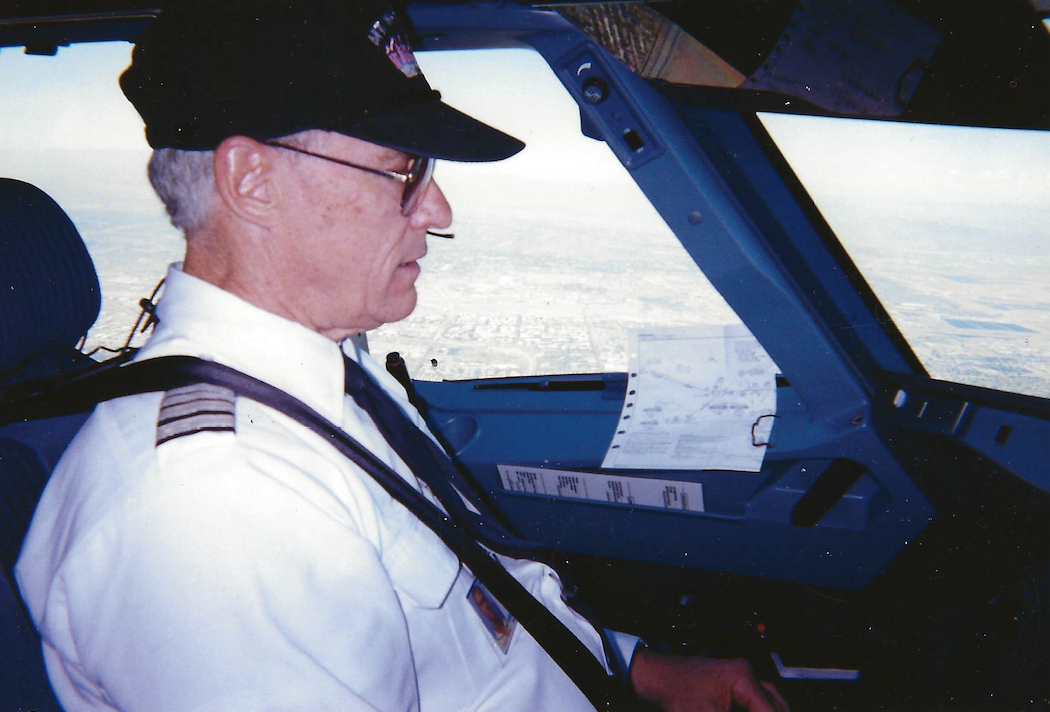 ABOVE:  Jay flying his last flight with America West Airlines in the Airbus A-320 in 2002

BELOW:  Jay receiving an award from ALPA in 2002 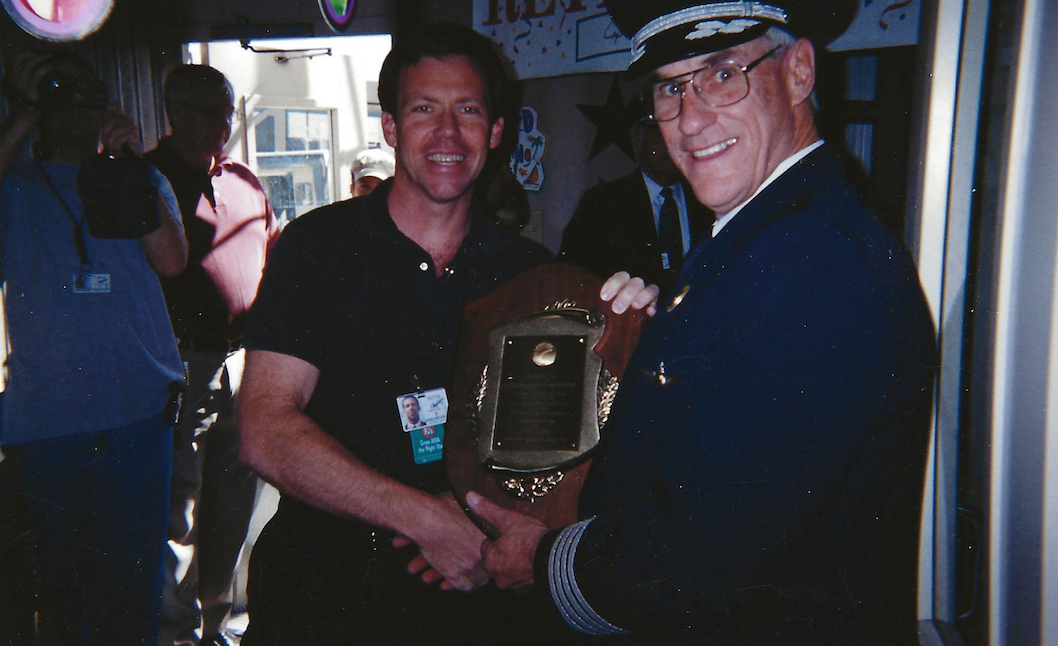 Appreciation
The action in the movie is at some moments very tense and breath-holding. Loggia and Bakula nicely play their roles, along with the other secondary actors. The audiovisual quality is excellent and the air to air images are magnificent, most likely professional commercial footage. However, that compensates for the “amateur” special effects, that might remind you of the movie Airport. Also, too bad they don’t give many precisions about the real event: no date is given at any time.

I give this movie 8 out of 10.
It is an excellent movie to watch with the family, and will keep you restless at key moments.

Things to notice
Here are the goofs and trivia for Mercy Mission: The Rescue of Flight 771.

Here are the main differences between the real event and the movie depiction. This information comes from Stanley Stewart’s excellent book Emergency! Crisis on the Flight Deck .

Movie links
If you have other URLs to add to this list, or to report a dead link, please contact us.

Among the many comments made to this story, one (from Allen) stood out with it’s suggestion: “As a double-check, Why didn’t Gordon Vette and New Zealand’s Air Traffic Control ask several Amateur radio Operators in New Zealand and on Australia’s east coast who had directional (rotatable) antenna beams to get A compass ‘fix’ on Jay prochnow’s HF transmissions to deduce his approximate position? I’m astounded that New Zealand wasn’t prepared to immediately launch at least several rescue aircraft that all had a radio direction finder?!!”