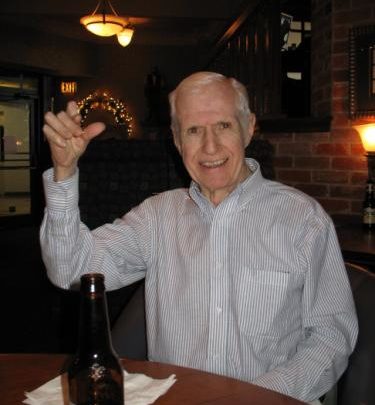 Attitude describes Captain Pete Lamkin. And ATTITUDE, after all, is an eight letter word!

Pete is a fellow who personifies that word along with a few other adjectives such as “humility” and “perseverance.” Pete doesn’t look like someone with unbelievable toughness. Quiet, soft-spoken, but tough he certainly is.

Captain Pete Lamkin is nearing his 84th birthday. Many, including Pete, never expected him to experience the longevity achieved so far. Many, including Pete, never expected him to reach mandatory retirement age still in command of the airliner entrusted to his very capable albeit gnarled hands. Pete was forced from his favorite chair, the left seat, of his airliner by the onerous Age 60 Rule. In 1993 he down-bid to fly as flight engineer for a year before settling into his retirement regime.

Before Pete’s amazing career ended he had proved his mettle by overcoming all the seemingly unsurmountable obstacles life tossed in his way.  The “Unstoppable Molly Brown” has nothing on Pete Lamkin.

On March 6, 1956 Pete began his career as an airline pilot with Frontier Airlines. He was a very active fellow in those days. Athletic, he was a well known skier. And STRONG!  He was exceptionally strong for his size.  One day, Jim Appleby, Pete’s co-pilot laid on his back on the floor.  Jim’s arms were crossed across his chest and his legs held tightly together.  Pete picked Jim up and used Jimmy D. Appleby as a bar-bell.  Jim was around one hundred and eighty pounds and nearly six feet tall!

But something was wrong. After skiing Pete noticed he was having difficulty standing and walking after removing his ski boots! This didn’t last long at first, and it wasn’t the first time he noticed something awry.

Before his airline career, when he flew for Clyde Davis in Grand Junction, he experienced some painful moments in one shoulder. Days later the other shoulder. Soon, he was looking for medical expertise. Unfortunately, the doctors were not well versed in rheumatoid arthritis, a disease Pete was unaware of as were most of the doctors. Eventually, Pete would come to understand as much as the doctors did about this terribly debilitating disease. 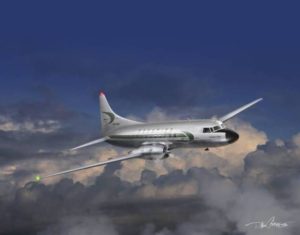 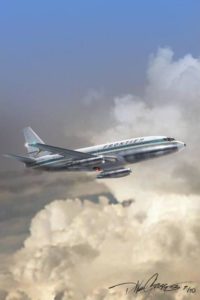 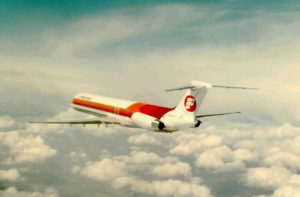 If there ever was anyone who truly loved flying Captain Pete Lamkin is that fellow. When he was not flying he was looking forward to the next flight. When he was flying, Pete loved soaring above the clouds, in the clouds, and being part of the machine he controlled. He loved the people he worked with and, if there was a contest, would likely win the “Most Favorite Captain Award.” Yup, Pete is a very special fellow and one we all wished to emulate.

Never one to complain about his plight, rather Pete was grateful for every flight and for the association he had with his fellow crew members both in-flight and on-the-ground. The rest of us marveled at his indefatigability. I doubt there has ever been a more tenacious person. 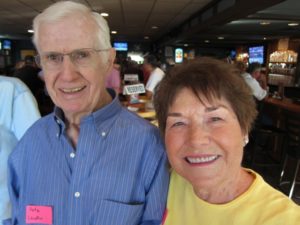 Gold shots, experimental drugs, silicone implants. Pete is likely the all-time arthritis “poster child.” Unerringly, Pete was a guinea pig. Knowing much of what Pete was experiencing we fellow Frontier pilots were awed as he trudged out to his waiting Convair 580 somehow carrying his flight bag in one hand, his overnight bag in the other.

Pete never asked for help. Never! He wouldn’t even allow his wife to help him button his shirt.  We all were aware of Pete’s hold on his independence and his determination.  While we marveled at him, we gave him the space he needed.  Heads shook in admiration.  Just being around Pete would be a “WOW” moment.

Not wanting to miss any flying he bid his trips around doctor appointments and therapy sessions. How do you spell dedication? P-E-T-E-L-A-M-K-I-N!

The word ‘Hero’ is often wrongly applied to some. To those of us fortunate enough to know Pete, we feel that word applies. To me, Pete is a bonafide hero where “hero” is oft over used.  Not, in my view, in Pete’s case.

As of this writing I have known Pete Lamkin fifty years and twenty one days. I will never forget meeting Pete that first time.

I had the good fortune to meet Pete on my first day, July 5, 1967, as a fledgling new-hire pilot with Frontier Airlines. I showed up early for the start of my first ground school class administered by Ted Van Steenburgh. I sat in on a special training session where Pete was “indoctrinating” some new captains on important things they would need to add to their thought process as they moved a scant few inches from the right seat to the coveted left seat. I was impressed. First, I was amazed that I would be allowed to sit in on the session. Mostly, I was impressed with Pete’s demeanor and graceful teaching technique. One of those present was Karl Penner. I would be paired up with Karl for a short while in the DC-3 with Jack Robins our instructor. Before I flew the DC-3 on the line I was put back into Convair 580 training.  Sadly, Karl was lost in a crash of the Cessna 310 he was flying when it impacted one of the Spanish Peaks on the Sangre de Cristo mountains fifty miles east of Alamosa, Colorado.

I would come across Pete many times during my Frontier experience. Cheryl and I would see Pete socially many times over the years. Recently, Cheryl and I enjoyed a breakfast with Pete. Such a pleasure and another time to appreciate someone who has made a difference to so many. Certainly, Pete made a difference to my career. We spent over two hours catchin’ up. It was a great start to a long day traveling… 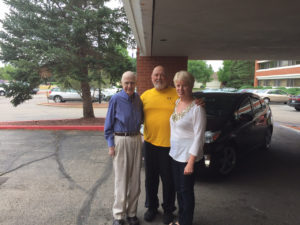