The following can be found in Walker Bunch – Part Three as well:

It is not yet 5 AM and I am wide awake thinking about the late-great Rueben Ace Avakian, captain extraordinare. I didn’t have the privilege of sharing Ace’s flight deck at Frontier. I always wanted to, but never had the seniority. So, in September of 2001, Ace and Janet’s joining us for one of the new JetBlue jet’s flight test and delivery was both an honor and a privilege. He really was one of the Best of the Best!  Below over OCN the tip of Greenland at 39,000′ and Ace is enjoying being back in the Left Seat. 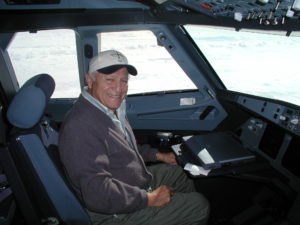 I was in Toulouse, FR for the test flight and delivery of a new A-320 for JetBlue when 9 – 11 shocked our world. Ace & Janet Avakian were along as my guests. My co-pilot was former Frontier pilot, Bill Brown and his wife, Donna, who was a former Frontier Sr. Agent and, later, a Flight Attendant for NWA. So, along with Cheryl, another former Frontier stew, we had a nice contingent of Frontier Family along for what turned out to be a lot more than we could reasonably expect. 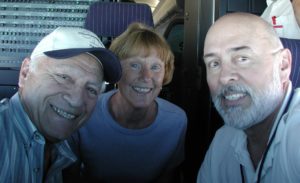 The morning of 9-11, we had just completed the test flight with Bill Brown and Ace on the jump-seats when we were notified by our company president, Dave Barger, that they were concerned about an aircraft that struck one of the twin towers. No confirmation at this point. A few minutes later, after the 2nd aircraft struck the north tower, we all knew our world had changed drastically. We just didn’t know how much.

We decided to hustle back to the hotel to look for our girls who were out shopping in hopes they didn’t know about the disaster. As we drove into the area where our hotel was located we passed a store that catered to American’s and notice the two large US flags standing out by the door- way. Across the street was the Algerian Consulate (make note of this).

Our wives were arriving back at the hotel simultaneous with our arrival. We told them of the unbelievable situation that now confronted us all. We turned on our TV’s to CNN, but could only see the video as the audio was in Italian! Somehow the feed got mixed up and we had no way of following the dialogue. So, we walked over to another hotel we often stayed at and watched TV there until the wee morning hours.

The next day we found out how obvious our nationality is to Europeans. A number came up to express condolences, some with tears in their eyes, as to the happenings in the US. We went back to the airport to take care of loose ends before heading back to the hotel. This time, as we passed the Algerian Consulate, we observed that the two prominent US flags were missing from the store across the street. However, the very next day, every place, it seemed, displayed “Old Glory!” Even the Algerian Consulate!

As you will recall, no one was flying anywhere, especially in the US. All flights were grounded. We were not sure when we would be allowed to fly. Slowly things relaxed some and we were able to get flight-planned to Keflavik, Iceland on the 14th.

We put out the word that anyone with a US passport was welcome to come with us. We had approximately 70 ex-patriots on our manifest at departure. None of us knew how far we would get beyond our clearance to Keflavik. Many of our passengers had family and friends in the towers. They did not know if they survived or not at this point.

You likely have heard a lot of bashing of the French. Not from me. Not after what they did for us.

As we pushed back from our hard-stand at the Airbus Delivery Center, they unfurled a huge American Flag. Old Glory hasn’t looked so impressive since 1814 when Francis Scott Key was moved to write the Star Spangled Banner. I was so moved I had to ask for them to hold the push-back. I regained my composure and picked up the PA to advise those on the right side to look out their window as they would see something very special. There was a huge “cheer” from the back of the plane, then silence. Cheryl told me later there was not a dry eye in the cabin. Ace was awed as well. He failed to shoot this scene with his omni-present camera. Moistened eyes were not exclusively the aft cabin’s…

Another point of note was when we checked in with ATC. They spoke clear English and were actually helpful in ways I wasn’t used to after many flights across the North Atlantic. Of course we were the only ones flying other than military.

We proceeded to Keflavik and fueled with the passengers & crew touring the nearly vacant terminal there. We were able to obtain another clearance which could actually get us to JFK. We were told we would likely have to stop in Canada since the US airspace was still closed. Kennedy was doubtful.

Passing Canadian ATC into US airspace was encouraging even though we were told that landing at JFK was not presently an option. We figured we could land at Newburg (Stewart AFB) or Islip on Long Island. We were fortunate that when handed to JFK approach they honored us as the first aircraft to land there since 9/11.

As we descended thru the overcast the sun was setting on the smoldering ground zero spot and we again missed a historic photo opportunity. It was a beautiful, surreal, and extremely sad sight all at once.

Another surreal sight was seeing JFK with no other aircraft movements and no vehicular movements. It was a dead-zone. Taxiing in we saw one JetBlue A-320 begin to taxi out. Our first indication of thing hopefully getting back to normal.

We arrived at US Customs only to wait a very long time for someone to check us all thru. They had not been told of the airport now being opened again.

We said our goodbyes to our passengers and wondered how we would all make it home ourselves. We arranged for Ace & Janet to get a ride on JetBlue to Denver and noticed some of the America West crews loitering in the lobby (this was when they shared the JetBlue Terminal at JFK). I saw old friend Doug Earhardt who was to captain an A-320 transfer to Phoenix. He readily offered Cheryl and I a ride only to be countermanded by the AWA manager at JFK. 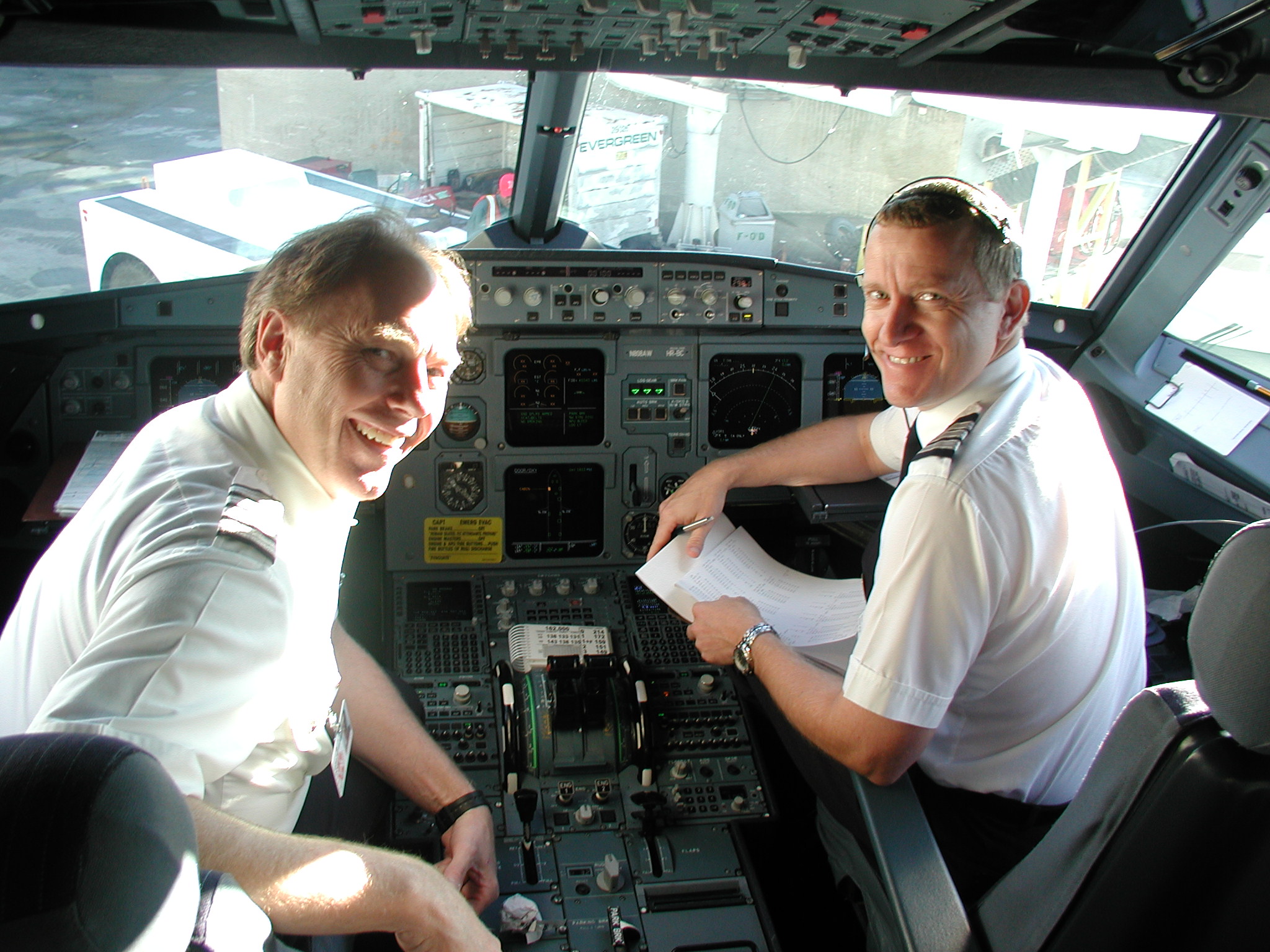 Undaunted, Doug called Joe Cronic, VP Flight Ops., who countermanded the AWA manager and we had our ride home. It was like our private jet as there were just 3 of us up in 1st class. The 3rd passenger was Doug’s lovely wife.

None of us will forget where we were and what we were doing on 9/11. I am grateful that I was with family. Cheryl and our JetBlue & Frontier family, the Browns and the Avakians.

Below:  A JetBlue A-320 over the Mediterranean. 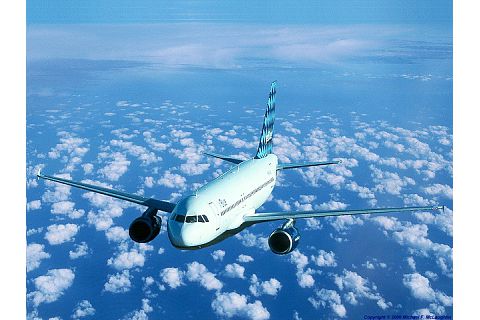 Below:  JetBlue’s first A-320 cruising past the World Trade Center 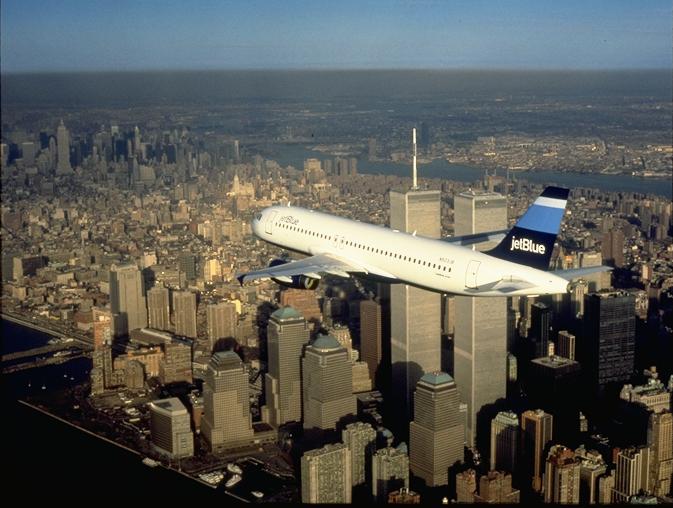