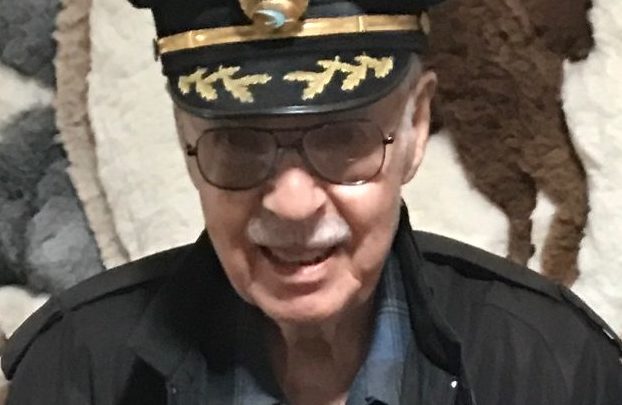 I have to tell you my Braniff story!  Tom Braniff and my father were buddies.  Mr. Braniff used to come to my folks resort, The Saratoga Inn, in Saratoga, Wyoming.   They were huntin’ and fishin’ pals.   I was not yet a teenager when Mr. Braniff told me that I would be a Braniff pilot when I had my ratings and was at least twenty years old.  Right then I had a goal!  It was 1953 and I was twelve years old.

Sadly, Mr. Braniff was killed in a tragic accident when the aircraft he was riding in lost a battle to low-level icing on Sunday, January 10, 1954. Thomas Elmer Braniff and nine others were killed in the Mallard crash in Louisiana. 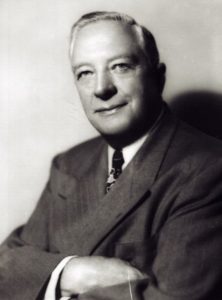 Tom Braniff along with other noted businessmen, sponsored by United Gas Company, were on a duck hunting trip near Grand Chernier, Louisiana. The group was traveling aboard a Grumman Mallard twin engine aircraft and encountered severe icing while the return trip home from Grand Chernier. The Pilot was, Bobby Huddleston, (his brother, R A Huddleston, was a fellow Frontier pilot). 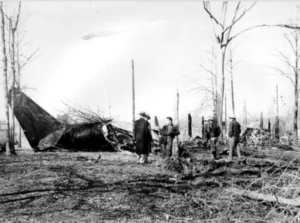 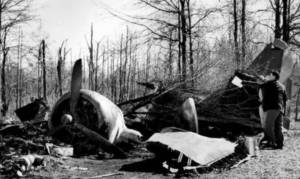 Bobby was a pilot for United Gas.  He tried desperately to save the aircraft but was unable to maintain altitude due to the fast accumulating ice on the wings and fuselage. Huddleston radioed that he was going to try to make it to Shreveport, Louisiana, just across the Texas border in Northern Louisiana. They didn’t make it!
Of course that ended Tom Braniff’s storied aviation career and my possible one with Braniff…
Flash ahead a few years when I was a co-pilot with good ol’ Frontier Airlines.   On my off-days I flew for Allied Aircraft, Inc. – Tucson, Arizona flying all kinds of war-weary airplanes.  Mostly military airplanes out of storage in Davis-Monthan AFB and Navy Litchfield.  A few were civilian aircraft.
One, a former Braniff 340/440 needed to be transferred from Tucson to Daggett, California.  It was only a two hour-two minute flight, but Oh So Memorable!

Picture this airplane after the paint was faded and the ship so forlorn looking…
Previously, a Braniff flight experienced an in-flight fire and emergency landing in Des Moines, Iowa.   On landing the right engine literally fell off.   However, there was no fire damage behind the firewall.  So, they installed another engine and some unknown pilot(s) flew it to Tucson for storage.
Allied had a contract to make the airplane flyable and I was assigned to transfer the airplane from Tucson to Daggett.  I wasn’t rated in the airplane.  Back then, no problem. The FAA would issue a LOA (letter of authorization) which allowed me to fly the airplane sans type-rating (with essential crew) from point A to point B avoiding populated areas. An A&P, of course, would have to sign a ferry permit (please don’t call me a ferry pilot!). This was prior to the Martin 404 crash killing the Wichita State football team.   No more LOAs after that!
My co-pilot ended up being Bob Banta.  Yup, the “Stud – Hoss – Slick & Tiger” Banta who was actually rated in the Convair 240/340/440 and the Allison Convair flying them as a Frontier Airlines captain.  I had flown with Bob Banta several times at Frontier and he had no problem flying with me as co-pilot on this adventure and an adventure it was.
The old Braniff 340/440 looked derelict!  The paint was badly faded.  The interior was in equally poor condition.  In fact, the floor boards had been removed and the bottom looked absolutely terrible with oily rags and such.  If the airplane had caught fire it would still be burning today!
Banta and I mulled it over and after speaking to Jack Kern, Allied’s chief of maintenance, we decided to fly the airplane.  It was a short flight from Tucson to Daggett.  As I mentioned, just two hours & two minutes and the weather was clear and calm!
That ol’ rag turned out to be a dream to fly.  Banta and I were both surprised with this mangy lookin’ airplane.  I noticed that I could trim it, as we climbed, and was able to take my hand off the yoke.  That was unusual.  Every other Convair I’d flown was a constant exercise in trimming.  I said, “Bob, see what you think!”  Bob flew it and experienced the same reaction.  We started thinking it might be flyable afterall!
Jack Kern had replaced the missing CB-16 engine with a CB-17 (an advanced version of the ubiquitous Pratt-Whitney R-2800).  The CB-17 was rated at one hundred horsepower more than the CB-16.
Jack used a CV-440 augmenter on the right side (different from the CV-340 augmenter on the left side).  Noticeably, the “Beaver-Tail” was missing on the left side to add to the derelict appearance of this once proud airliner. The Beaver Tail, was designed to give some pre-stall warning creating some vibration prior to the actual stall which, in any transport airplane, is not a good thing.
YUP, it was one ratty lookin’ airplane.   But, it did something no other Convair I’ve flown or Banta either.  It trimmed up HANDS OFF!  It flew GREAT!   We purred along those two hours & two minutes to Daggett.  Somehow I buttered it on the runway before taxiing in and shutting down.
Then the excitement began!  We had to call for a cab to whisk us to the Greyhound terminal to catch a bus to Las Vegas.   Our plan was to catch a Frontier 727 to Denver then I would catch another FAL flight to SLC as I was scheduled for a flight the next day.  …I shoulda given myself more time!
After taking care of the paper-work, Banta and I changed out of our flight togs into traveling attire and jumped into the waiting taxi.  Soon, we checked in at the Greyhound counter.  “Sorry, but the bus is already full!”   “WHAT!”  “We are in Daggett no-where-California!”  “How can the bus be full?”

This was followed by an incredulous look intimating that WE shoulda known.  Then Stud-Hoss-Slick & Tiger started workin’ his magic!
The next thing I knew we had seats on the next bus thru Daggett en-route to LAS.  A few minutes later, Banta worked it our for us to trade with a couple and we were on the first bus!  WHEW!  No sweat, right?
Off we went down the worlds loneliest highway with two creosote bushes, a horny toad, and four lava rocks as the only things between Daggett and the Nevada state line!
Then, mid-way, the bus slows down and pulls over to the side of the road and stops!  WHAT?

The driver gets off.  Then Banta, dressed in a suit and tie, gets off.  I sat scratchin’ my head.
A few minutes later Banta and the driver re-board and soon we are heading towards LAS again.  I’m lookin’ at Banta.  His hands have the appearance that they have just re-built the dirtiest greasiest motor of all time.  Close!
I ask, “Bob, what’s the deal here?”  Banta said, “I used to own a bus-line in Billings.   So, I showed the driver how to jury-rig broken fan belts.  We should be OK now.”

WRONG!
Many more miles ahead when we pull into the state-line casino parking lot. The driver announces that we can go no further and we will have to wait for Greyhound to send another bus.
I’m now gettin’ behind on my worryin’ about my Frontier commitment when I look around to see where Banta was.   I spied him out on the highway flagging down the second bus from Daggett!
Amazingly, Banta has talked us onto the bus standing in the isle for the rest of the drive into LAS!   I’m impressed!  Banta even found time to wash up.
The bus enters the Las Vegas street system and stops at a red light. Banta spies an empty cab next to us.   The next Bantaism was for him to talk the driver into letting us off to catch the cab.  Banta had already signaled the cabbie to wait.
Soon, we were in the cab roaring through LAS to Mccarran field.  Next Banta talks the cab driver to enter on the general aviation side and then actually drive us across the north-south runway right up to the Frontier 727 where the air-stairs are just being pulled away.  Of course this was long before TSA came about… 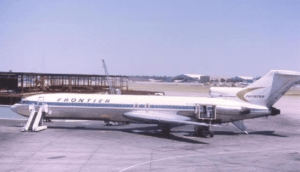 Seeing the senior agent, who Bob obviously knew, I then observed the air-stairs re-position to the entry door to the 727.   I’m now in a state of misbelief!  But, I am on-board the airplane and in a first-class seat as the door closes.
Banta comes back from his visit to the flight deck and sits beside me and says, “I spoke with the captain, Willy Hurt, and he says ‘no sweat’ we can make the paper-work agree when we get to Denver.”
We did, and I made it to my SLC flight and then to my scheduled flight in the 580 the next day.  Now, it is nearly a half-century later and I am still amazed at how Stud-Hoss-Slick & Tiger made things work out.  To him it was “all in a days work!”  Amazing!  You can read more about Banta in my story about flying ‘Fertile Myrtle’ the Navy P2B-1S (B-29)! 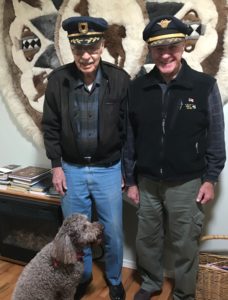 Above:  Stud-Hoss-Slick & Tiger with John Heimberger (Bend, Oregon 2017) Banta, now 92 is still goin’ strong!  John and Chris Heimberger are part of our amazing Frontier Family!  John was a pilot & Chris was a flight attendant!
Dave Nichols sent the following post-script:  Thought you might be interested in the history of that CV340.  N3427  s/n 90.    The in-flight fire was over Iowa and landing at DesMoines.  As Billy mentioned, the airplane was ferried  to TUS and then more ferry flights, eventually staying at Barstow, CA.  It sat there from 1967 until 1989!   It was a desert hot mess.  However, Century Airlines, a freight carrier out of Pontiac, MI came to the rescue in early 1989.  They flew a small fleet of Convairs picking them up here and there.  Why in the world they had an interest in N3427 is a mystery.  Restoration began.  In 1994 Century became IFL group and were converting their Convairs to 580s and purchased some to become Super 5800s.  They would choose a low priced 340/440 airframe and do the stretch conversion.  It looks like N3427 became a 580.  It flew in 1994.  The owners name changed to Contract Air Cargo (Pontiac MI).  This is where you may have seen N3427 flitting around the USA carrying cargo.  It was on a frequent run to south Texas bringing back Mexican produced items.  Seen operating in mid-1990s up to June 2004.  An aviation tracking website shows N3427 (CV580) last flight in December 2006 from Harlingen TX to Brownsville TX .  Registered to Aviones Inc.     So, your ratty but great trimming Convairliner did good.
NOTE:  I just looked at the FAA website.  Apparently, it wasn’t a 580 as the last registration shows P&W R-2800s as the power plants?