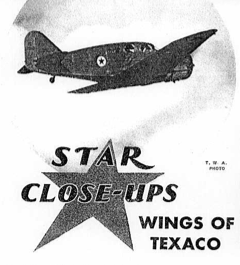 Aubrey Jennings Keif is probably the only American pilot to have flown combat in kilts. For sure he’s the only one I know of. 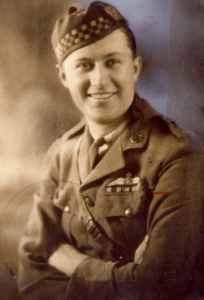 Born on August 22, 1898 in La Junta, Colorado, Keif was attending Columbine High in Pueblo when he left school in 1916 to learn to fly with the Royal Flying Corps. He was attached to a Scottish fighter squadron flying the ubiquitous Sopwith Camel. By the time he returned from World War One, he not only had a great kilt uniform, he had a chest full of medals including the DCM (Distinguished Conduct Medal) awarded as a pursuit pilot. In WWI the DCM was the British equivalent of the Distinguished Flying Cross.

Below: Aubrey on the right with an unknown Scottish pilot – France 1918. 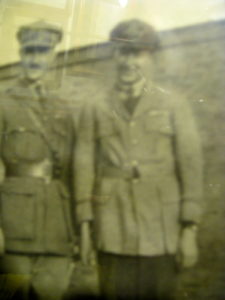 Keif remained involved in aviation there rest of his life except for a stint as sports writer and city editor of the Pueblo Chieftain newspaper in Pueblo, Colorado. In the late summer of 1929 Keif went to worked as Regional Sales Manager for the Curtiss-Wright Airplane Company in Denver. There he flew Fledglings, Robins, Moths, Command- Aires, Travel-Aires, Alexander Eaglerocks and Stinson aircraft.

By 1930 Keif was part of the Colorado National Guard flying the old Douglas O-2H along with other notable Colorado pilots such as Carlos Reavis, Eddie Brooks, Jack Fitzpatrick, and Nolie Mumey (the flying flight surgeon). 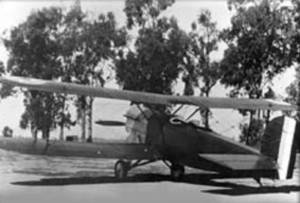 Keif had over 2000 hours logged by 1932 flying, as he termed it, “bailing-wire biplanes powered by ‘please don’t quit’ engines.” That same year Keif joined Texaco as worldwide manager of Texaco’s aviation activities. Keif became Texaco’s Director of Aviation Sales in 1936, a post he held until his retirement in 1965.

Like with his close friend and aviation petroleum counterpart, Billy Parker, Keif exhibited strong leadership as chairman of the Aviation Services Technical Committee of the American Petroleum Institute and chairman of the Aircraft Manufacturers Study Committee on SST Fuel design considerations. Keif held many other positions of note and received numerous honors for his contributions.

Keif was active in the Quiet Birdmen and Conquistadores del Cielo organizations. As a youngster growing up in Wyoming, I remember Aubrey J. Keif not so much as the aviation icon others held him to be; I saw him as an aviator in a world of pilots who would encourage a young fledging wanna-be to pursue his dream of flight.

Keif would fly into our little Wyoming town of Saratoga, population of some 800 in the winter months that swelled to, perhaps, 1200 in the summer with fishermen migrating to compete for the elusive rainbow, brook, or brown trout populating the blue ribbon fishery called the North Platte River.

Keif was there as a member of the Conquistadores del Cielo a secretive group of aviation leaders from across America. They stayed at my parents resort “The Saratoga Inn” and the “AbarA” guest ranch a few miles south of town. 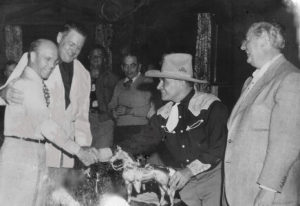 Paul Richter, Walker, and TWA President Jack Frye, while on a weekend trip to Forked Lightning Ranch in New Mexico, founded the Conquistadores del Cielo. After inviting fellow aviation executives and enthusiasts to share in a later weekend retreat, Walker and Frye developed the idea to begin a “club” with the spirit of aviation as the centerpiece. The original retreat was held in 1937.

Conquistadores del Cielo was organized by the following year (1938) with a retreat at the Brush, Valley, and Forked Lightning Ranches.  Later, they moved to Saratoga and gathered at both the Saratoga Inn as well as the AbarA Ranch owned by the wealthy Gates family from Denver. The AbarA ranch occupied some 5000 acres. The Inn sported the first all-grass golf course in Wyoming.

Years later, George B. Storer of Storer Broadcasting Company and owner of Northeast Airlines built a magnificent lodge and high-end homes above Saratoga. Apparently, the Conquistadore Del Cielo members gather there instead of the Inn in recent times.

I relish the days when, as a youngster, I eagerly awaited the annual arrival of the Conquistadores. This was in the 1950’s before the jets came along. Those were round- engine days. Like my friend and fellow Arizona aviator, Tom Weidlich says “Jets are for kids!”

Many of these aviation stalwarts were long time friends of my parents from the early days when they operated Plains Airways, Inc. in Cheyenne and Laramie, Wyoming and Ft. Morgan, Colorado.

Keif would fly into Shively Field (named after Lt. Jack Shively), Saratoga, Wyoming. Shively was killed in action near Chinon, France during WWII. Shively was flying the P-51 “Mustang” when he lost a battle to two Folk-Wulf 190’s who got the drop on him. 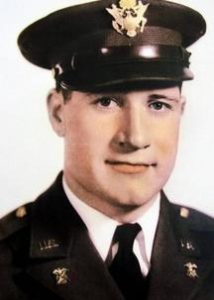 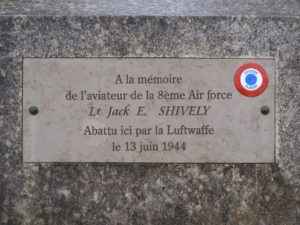 I remember Keif’s beautiful Texaco Spartan Executive with it’s Pratt& Whitney 450 as he buzzed town and then the airport. He buzzed town to let us know he’d need a ride to The Inn. He buzzed the airport to let the antelope know it was time to find another place to graze. 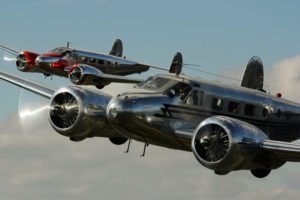 Aubrey gave me the clock from Texaco’s Northrup Gamma, famous for it’s polar flights. I still have it. It still runs perfectly! 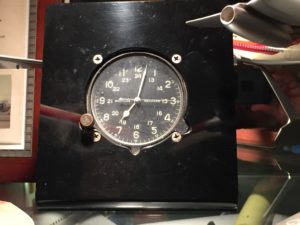 Northrup’s first “Gamma,” a development of the “Alpha” was flown by the legendary Frank Hawks. It was called the “Sky Chief.” Keif and Hawks worked closely together in the 30s when Hawks was one of the most famous air race pilots in the world and Keif nearly as well known for his contributions to aviation. Hawks met a sad end flying a Gwinn Aircar in New York – August 23, 1938. Keif died June 22, 1975 just two months shy of his 77th birthday.

The 2nd Gamma was used in the Antartica by Lincoln Ellsworth. It too was a Texaco sponsored airplane. 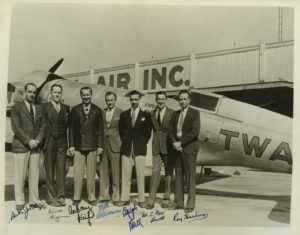 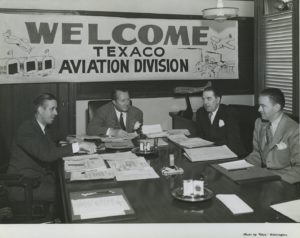 Gwinn Aircar – uglier than a man’s fanny! Sad to think the great Frank Hawks would die flying something like this after all the flying he did in so many truly beautiful and extraordinarily high performance aircraft. 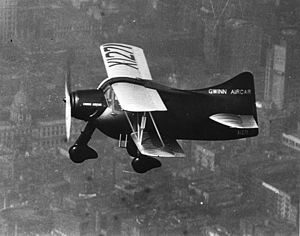 I still think the Texaco Spartan Executive is one of the prettiest airplanes ever produced. Aubrey kept it shining like a mirror and there never was a drop of oil under it like with most radial engines.  I remember my Dad keeping his C-17 Staggerwing Beech and D-18 Twin Beech spotless. Yet, he would d keep drip pans underneath. This was unnecessary with the Texaco Spartan Executive.

There were many magnificent corporate aircraft that came to Saratoga’s little dirt strip. Sam Keener flew his Consolidated (Ford built) B-24 look-alike, the C-87; Arthur Godfrey flew his Douglas DC-3 that had been given to him by Eddie Rickenbacker. Rickenbacker accompanied Godfrey on more than one occasion as both were Conquistadores. 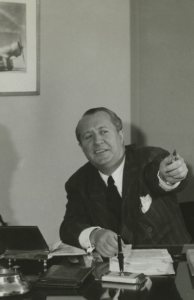 Al Litzenberger would fly into Saratoga in the Mesta Machine Douglas A-26. He took me to California when I was just 12 years old. I remember telling Al and Jack Bald, his co-pilot, that I would own one someday. I doubt they believed me. But I did! And it was a “WOW” airplane! 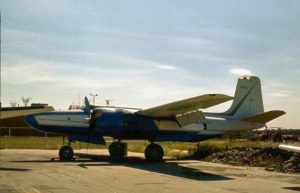 Billy Parker flew into Saratoga in numerous Phillips Oil Company aircraft. One trip would be in the Lockheed 12A, then next perhaps the Lockheed L-18 “Lodestar.” He might bring the DC-3 or even the Phillips A-26, and once it was in a Grumman Mallard. He mostly flew single pilot, but gave me a lot of “stick time” when I was young and willing to kill for an hour’s flight time.

I remember a nice B-25 there. It was tan in color, but marked beautifully. I don’t remember the company or the pilots who flew it. Likely, they shooed me off when I came around with that hopeful look many of us had before fate and time allowed us opportunities. Looking back, I was lucky. My Dad told me more than once, if I have a choice between skill and luck; take luck! I have and so far my luck bucket has a little left.

Bob Six had been a pilot before his involvement in Varney Airlines which he later renamed as Continental Airlines. However, when he arrived in Saratoga for the Conquistadores gathering it was in a Continental Lodestar and later a Saberliner.

I think of these great aviators from the earliest days of aviation who followed fair winds and cloudless skies into the beautiful little Platte Valley of Wyoming and I remember their kindness to a snot-nosed wanna-be kid.

I will remember to toast Aubrey, Billy and the rest for they’ve all Gone West to a place offering an infinite choice of airplanes; all with unlimited fuel, and no briefing or de- briefing required. If they use the gunnery range their guns won’t overheat even with unlimited ammo. And, they hit the target square on every time.

When they head for the O-Club, the beer will be cold and everyone will believe their stories.